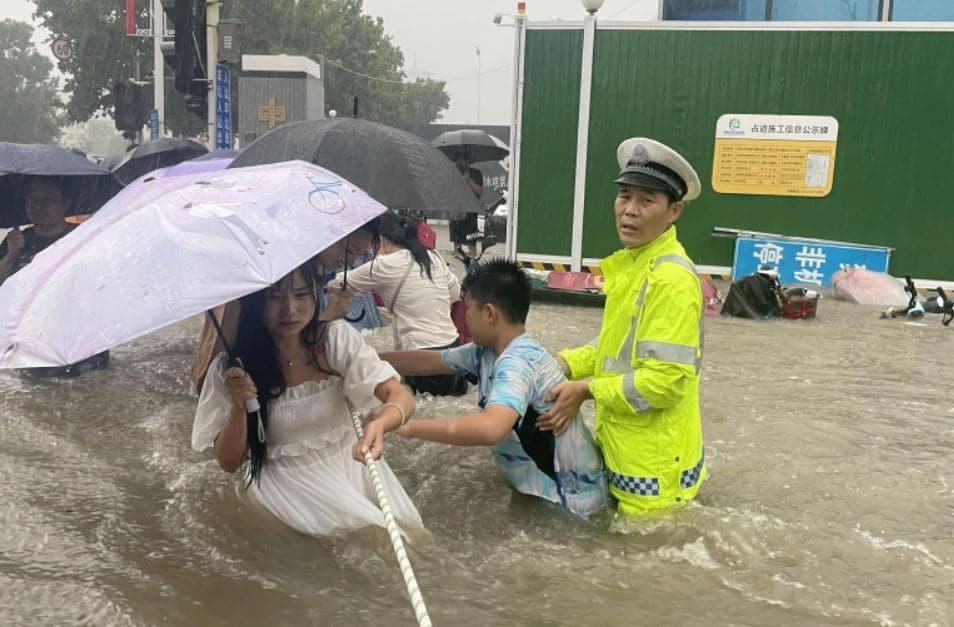 About 200,000 residents were evacuated as of Wednesday as soldiers led rescue efforts in Zhengzhou – a city of more than 10 million people – where days of rain have inundated the streets and subway, local government officials said.

Images shared on social media on Tuesday showed passengers up to their necks in water and clinging to the handrails inside a carriage on Zhengzhou’s subway. Other passengers filmed videos of the water rising in the tunnels outside the carriage windows.

The provincial capital had “experienced a series of rare and heavy rainstorms, causing water to accumulate in Zhengzhou metro”, city officials said in a Weibo post on Wednesday.

At least twelve people were killed in the Metro, five more were injured and more than 500 were rescued, officials said.

“The water reached my chest,” a survivor wrote on social media. “I was really scared, but the most terrifying thing was not the water, but the increasingly diminishing air supply in the carriage.”

The dead included four people who were killed in Gongyi city where houses and walls collapsed, the official Xinhua news agency said, adding that rainfall had caused multiple landslides.

Storms have battered Henan province since the weekend in an unusually active rainy season that has caused rivers to burst their banks, flooding the streets of a dozen cities and upending the daily lives of millions of people.

Weather authorities in Zhengzhou, nearly 700km (431 miles) southeast of Beijing, say the rainfall was the highest since record-keeping began 60 years ago with the city seeing the kind of rain it usually gets in a year in just three days.

The amount of rainfall was seen only “once in a thousand years”, local media cited meteorologists as saying.

“People are shocked, trying to register what is happening,” said Al Jazeera’s Katrina Yu, who is in Beijing. “This is the most rain that many people have seen in their lifetimes. Many have described the situation as ‘terrifying’.”

Overnight, authorities warned the deluge had created a 20-metre (66-foot) breach in the Yihetan dam in Luoyang – a city of approximately seven million people – with the risk that it “may collapse at any time”.

As rain continued to fall on Wednesday, thousands of firefighters and troops were deployed to the region to help with search and rescue, and President Xi Jinping went on state television to demand authorities at all levels give priority to ensuring people’s safety, and implement flood prevention and disaster relief measures.

“Some reservoirs had their dams burst … causing serious injury, loss of life and property damage,” the president said on Wednesday. “The flood control situation is extremely severe.”

Henan province, home to the Shaolin Temple and many other cultural sites, is one of China’s most populous and a major base for both industry and agriculture.

Floods are common during China’s rainy season, but the threat has worsened across the decades, due in part to widespread construction of dams and levees.

Some residents spent the night in their workplaces or hotels.

Wang Guirong, a 56-year-old restaurant manager, said she planned to sleep on the sofa in her restaurant after being told there was no power in her neighbourhood.

“I have lived in Zhengzhou all my life and have never seen such a heavy rainstorm as today,” Wang said.

The State Grid Zhengzhou Power Supply Co said it was forced to shutdown a city substation because of the rain.

Schools and hospitals had been cut off by the waters with some children reportedly trapped in their kindergartens since Tuesday.

The First Affiliated Hospital of Zhengzhou, which has more than 7,000 beds, lost all power, and even backup supplies were down, the People’s Daily reported.

The hospital was racing to find transfer about 600 critically ill patients to alternative facilities.