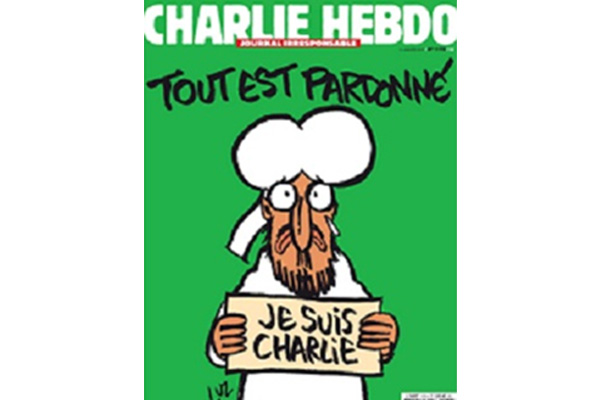 Paris (AP) — The French satirical weekly Charlie Hebdo is publishing a cartoon of the Prophet Muhammad on the cover of its first issue since Islamic extremists killed 12 people at its offices.

The newspaper Liberation hosted Charlie Hebdo staff as they prepared the new issue and is handling its special one million-copy print run in numerous languages.

Liberation published the Charlie Hebdo cover online late Monday night, showing a man in a white turban it says represents the prophet. He is holding a sign reading “Je suis Charlie” (“I am Charlie”) and with a title reading “Tout est Pardonne”) (“All is Forgiven”), which French media interpreted as meaning Muhammad is forgiving the cartoonists for lampooning him.

Charlie Hebdo’s past caricatures of the Muslim prophet appear to have prompted last week’s attacks, part of the worst terrorist rampage in France in decades.

Some witnesses reported that the attackers at the paper’s offices shouted “We have avenged the prophet.” Many Muslims believe all images of the prophet are blasphemous.

A total of 17 people died in last week’s attacks. Brothers Cherif and Said Kouachi and their friend, Amedy Coulibaly, were killed Friday by police after the murderous spree at Charlie Hebdo offices and a kosher supermarket. The three all claimed ties to Islamic extremists in the Middle East.

French police said Monday that as many as six members of a terrorist cell involved in the attacks may still be at large.

France saw its biggest demonstrations in history Sunday as millions turned out to show unity and defend freedom of expression.