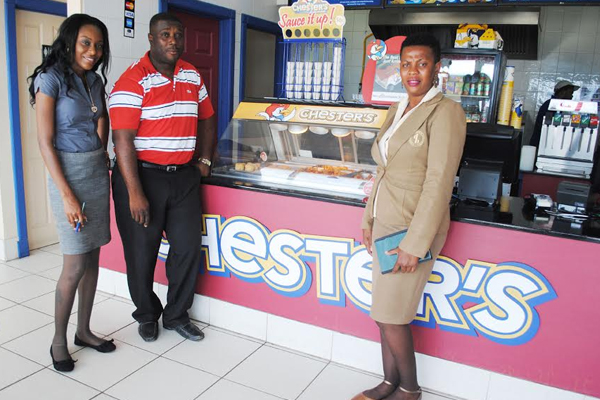 Basseterre, St. Kitts — Best known as the ‘Bank that lends a helping hand’, the Development Bank of St. Kitts and Nevis has recently come to the aid of a young national whose entrepreneurial spirit has led to the introduction of the Chester’s Chicken franchise to the Federation.

Situated in the Caribbean Cinemas Complex at the historic Buckley’s Estate, the new franchise which had its ceremonial opening on Thursday June 26 by among others the Prime Minister the Rt Hon Dr Denzil Douglas has become a favourite among moviegoers.

Local franchise holder is businessman Mr Shervin White who said that he was looking for a franchise that would be easily accessible and attainable because some franchises can be very expensive.

“During my research I came across Chester’s Chicken and it was reasonable in terms of franchise cost,” observed Mr White. “It also exhibits the qualities that people are looking for in terms of a healthy lifestyle, and in terms of where people eat in terms of nutritional values right now; so it actually fell in place.”

After he contacted them, a representative from Puerto Rico came down and helped Mr White in looking around for a suitable spot and they established that the Caribbean Cinemas Complex location was an ideal venue because people coming to the cinemas would need something to eat.

The location held more promise because it also provides ample parking spaces for people coming to patronise Chester’s Chicken during the lunch hour or any other time during the day unlike similar businesses in town. He set out to look for money to formalise the deal to acquire and bring the franchise to the Federation of St. Kitts and Nevis.

Mr White approached the Small Enterprise Assistance Fund (SEAF) of the Sugar Industry Diversification Foundation (SIDF) but which is managed through the St. Kitts Investment Promotion Agency (SKIPA), as he would have done business with them before. He also approached the Development Bank of St. Kitts and Nevis.

“It was really a combination of SEAF and the Development Bank,” explained Mr White. “I had SEAF for a much longer period and I also put in my own personal funds and to just seek some additional assistance, Development Bank came to the rescue to make up the difference. This was the first time I would have dealt with the Development Bank.”

With everything in place, the Chester’s Chicken franchise opened on 26 June with a grand opening ceremony, which was graced by the presence of the Prime Minister, the Rt. Hon Dr Denzil Douglas, and other dignitaries. A Chester’s representative from Alabama come down to assist with the training of the staff and the opening to the public on the 27th.

“We have eleven persons working for Chester’s Chicken that include a manager and a supervisor,” said Mr White. “However, four of those employees are from the People Employment Programme (PEP), who we will eventually keep according to their performance.”

According to Mr White, the business has been very good. People have been coming and trying out the brand. As a result of customers’ comments and suggestions he said that they made some adjustments to suit the local market and its taste, and that has taken off very well. Students from the Ross University are regulars as they have no problem with parking.

“The Development Bank and its staff were very helpful through the whole process,” observed Mr White. “In terms of the business plan they pointed me in the right direction and I got help in doing the business plan from them.

“The bank on a whole has been very remarkable especially as a young person who is doing something this major. I was greatly assisted by the manager of the Development Bank’s Business Support Unit Mr Shavon Douglas, and Business Support Officer Ms Jasmine Primus. They have been very helpful – very supportive. When I need help they are always there. They have been very, very good.”

Development Bank’s Business Support Officer, Ms Jasmine Primus, observed that since the bank’s motto is ‘promoting total empowerment through economic, social and national development’ its priority is to help small businesses within the Federation to enhance the products and services that they have to offer.

“So when Chester Chicken approached the bank, we saw it as a potential venture to develop within the Federation as a small business operator,” commented Ms Primus. “We saw growth and development in that venture as such.

“In addition to the growth and development of a business, the bank also looks at it in terms of creating employment for local people, which has happened with the case of Chester’s Chicken, and also the overall economic structure for the Federation. Everything fell within our developmental parameters.”