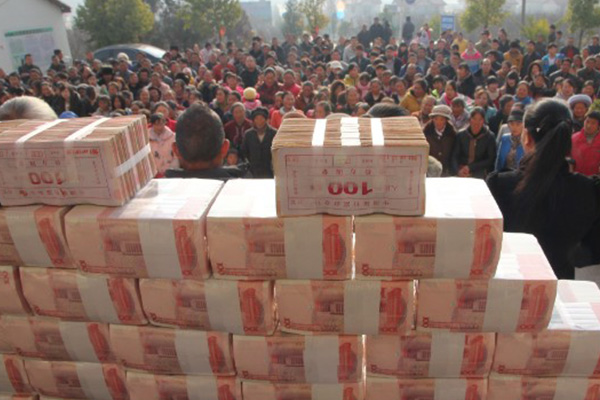 Hong Kong (CNN) — Farmers from a village in southwest China literally turned a multimillion dollar windfall into a wall of cash.

This week, residents of Jianshe village in Sichuan Province took delivery of blocks of money worth 13 million yuan ($2.1 million) in year-end bonuses they had earned from a rural co-operative scheme. Residents had invested in farmland and small-scale hydropower plants since 2010.

Around 340 out of 483 households are shareholders in the small village, which has a population of less than 2,000 people.

Before they could distribute their earnings to individual residents ahead of Chinese New Year, they had the problem of where to store — and guard — it.

Chief villager, Jin Hongyuan, told local media he moved the money inside the village committee office after transporting it from the bank on Monday. To keep the money safe, he appointed three villagers to sleep on the banknotes inside the office, while four others stood guard outside.

The following day, the banknotes were moved into the village square and stacked to form a seven-foot long wall and create a $2 million photo opportunity.

Many villagers said they had never seen so much money before.

Villager Jin Ou, who collected the most dividends from his investments, was delighted to finally get his hands on 300,000 yuan ($49,000) in cash.

“It’s so cold, and I’ve been counting (cash) for the whole day, my fingers are all numb,” he told reporters.

The story was an immediate hit with China’s legions of Internet users.

One netizen, known as “xiaomili_xiaomi” took to Weibo, a Twitter-like service, to post: “Let’s be friends, rich villagers!”

Others asked if they could join in on the investment bonanza and become a member of the rural co-operative.

Unfortunately, the scheme only allows investors who are members of Jianshe village. The only way to join is by marrying into the families, said Jin.