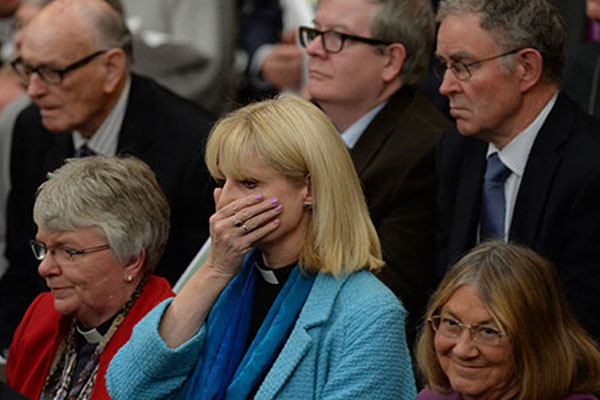 Stockport, United Kingdom (AFP) — The Church of England on Wednesday named vicar Libby Lane as its first woman bishop, following a historic change in its rules.

Lane was named as the next bishop of Stockport, in a dramatic new step for England’s state church after years of wrangling and division over the move.

“It is an unexpected joy for me to be here today,” Lane said after being named in Stockport, a town outside Manchester in northwest England.

“It’s a remarkable day for me and I realise an historic day for the church. I’m honoured and thankful to be called to serve as the next bishop of Stockport and excited, though not a little daunted, to be trusted with such a ministry.”

The mother church of the global Anglican Communion, which has around 85 million followers in more than 165 countries, gave its final approval to the change last month.

Other churches in the communion already have female bishops.

The Church of England backed the introduction of female priests in 1992 and the first were appointed two years later. They now make up one-third of the clergy.

“I would like to congratulate Elizabeth Lane on her appointment as Suffragan See of Stockport and in doing so becoming the first woman bishop in the Church,” Cameron said in a statement.

“This is an historic appointment and an important step forward for the Church towards greater equality in its senior positions.”

He added that the government would bring forward legislation this week that would allow women bishops to sit in parliament’s upper House of Lords.