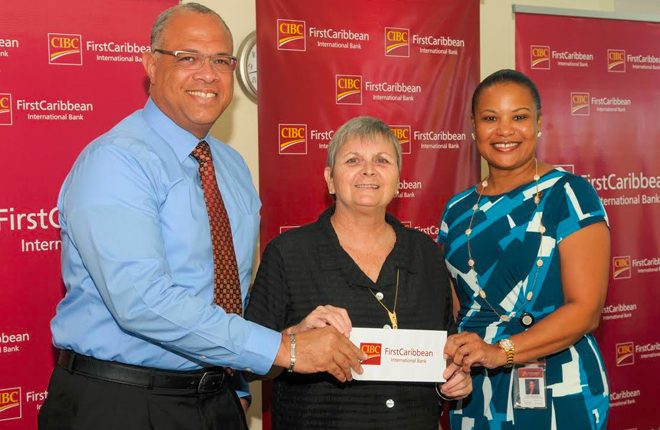 Bridgetown, Barbados, October 17, 2016: Close to one million Haitians could soon have access to safe drinking water as the charity United Caribbean Trust (UCT) moves to distribute 300 water filters across communities devastated by Hurricane Matthew which roared across the French-speaking nation earlier this month.

Recently , executives of regional bank CIBC FirstCaribbean International Bank, – Mark St. Hill and Donna Wellington presented a cheque for BDS $25,000 to Jenny Tryhane of the United Caribbean Trust to facilitate the purchase of the water filters for the community tanks, in the areas hardest hit by Matthew.

Donna Wellington, Managing Director, Barbados Operating Company, explained that even though CIBC FirstCaribbean does not operate in Haiti, the bank thought it socially responsible to help a Caribbean neighbour in need. She explained that the charity was not a new one as the bank had worked with them after the devastating 2010 earthquake struck Haiti.

She said Ms. Tryhane was also named one of the bank’s Unsung Heroes under a regional recognition programme which ran from 2003 to 2011 and so the bank was confident that the funds would be put to their intended use of supplying water purifiers which are so badly needed in light of the cholera outbreak there.

Ms. Tryhane said the water purifiers which will be purchased with the donated funds will be installed in schools, orphanages, prisons and churches in order to try and assist the greatest amount of people there.

She further added that she had spoken to Sawyer – the company supplying the purifiers and they have offered them a 50% discount on the purchase, so the bank’s donation would be able to buy double the amount of filters.

She said the filters can purify approximately 300 gallons of water daily so that when people gather water from the streams and rivers, the water can be filtered through these devices making it safe to drink. She stated that they were estimating that about one million people would be impacted by this donation which will help to buy about 300 community filters, adding that the need would be for buckets to bring the water from the rivers but these can be purchased on the ground in Haiti.

She said a team will be leaving for Haiti on October 22nd to manage operations there and set up the filters while she will remain in Barbados to coordinate the relief effort from there. A journalist and photographer will also be traveling with the team to document the relief efforts and the distribution of the items.

Mark St Hill, Managing Director, Retail and Business Banking and a Director of the CIBC FirstCaribbean Comtrust Foundation, the bank’s charitable arm, explained that the bank was also giving a further BDS $25,000 (equivalent) to Jamaican charity, “Food for the Poor.” This organisation will work to distribute food to those in Haiti affected by Matthew.

“We all watched the path of this hurricane as it moved through the Caribbean and considered ourselves fortunate that it did not devastate in the same way, any of the countries where we had operations but the people of Haiti were not so fortunate and we felt that we had to lend a hand to our Caribbean neighbours,” St. Hill said.