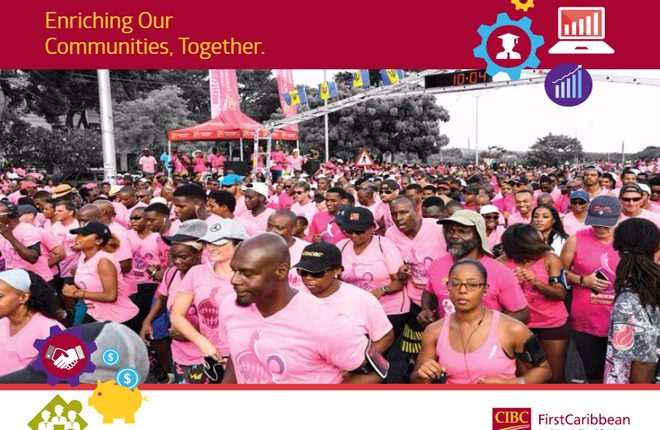 Bridgetown, Barbados, October 12, 2017 – Regional bank CIBC FirstCaribbean has seen an increase in its overall support for charitable causes across the English and Dutch Caribbean, according to its latest Social Annual Report.

The bank’s charitable arm, The First Caribbean ComTrust Foundation, recently released its Social Annual Report 2016 which revealed that it gave over USD$1.2 million to support over 600 mainly community projects in the 17 territories where the bank operates. This was over USD$200 000 more than the previous fiscal year.

The bank’s Chief Executive Officer and Chairman of the Board of Directors of the ComTrust Foundation Mr. Gary Brown said “reaching out into our communities and working with various organisations to improve the lives of the people of the region is what the foundation is all about. Our Adopt –A-Cause programme which sees our employees identifying projects to support in their various communities and getting their colleagues to volunteer to take part has allowed us to connect with our communities in remarkable ways.”

The ComTrust Foundation, which was formed in 2003 shortly after the formation of CIBC FirstCaribbean through a merger of the Caribbean operations of Barclays Bank and CIBC, has committed to giving no less than USD$1 million annually in support of projects in the communities in which the bank operates. Over the past 14 years the bank has given around USD$20 million to various initiatives around the region.

It focuses on three main areas of giving, Youth and Education, Health and Wellness and the Community and the Environment. Under these headings the foundation has signed Memoranda of Understanding with the University of the West Indies, The Hospital for Sick Children Foundation, Healthy Caribbean Coalition and Ten Habitat.

The bank has also partnered with cancer care associations across the region for its flagship activity, Walk for the Cure, which has raised over USD1.5 million for cancer care, support, early detection and education over the past five years.

The bank, the largest single donor of undergraduate scholarships to the UWI, is set to shortly sign another three year MOU with the University which will see additional funding for some new initiatives.

Disaster relief has also been a major area which received significant support from the bank with United Caribbean Trust and Food for the Poor also receiving substantial funding. The foundation along with the bank’s parent CIBC also committed a total of USD$550 000 toward disaster relief and rebuilding efforts in islands of the region impacted by hurricanes Irma and Maria in September.