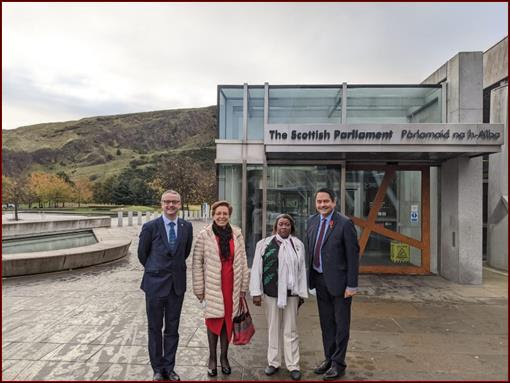 The 26th UN Climate Change Conference (COP26) currently taking place in Glasgow, Scotland, UK is a pivotal moment for the global community to raise ambition on reducing global emissions and meeting the commitments of the 2015 Paris Agreement.

From 5-6 November 2021, with international leaders descending on Scotland en masse to reach a consensus on climate change at COP26, Parliamentarians from across the world met in Edinburgh for the GLOBE COP26 Legislators Summit, hosted by GLOBE International and the Scottish Parliament.

The Summit provided an opportunity for legislators to hear from leading experts, academics and practitioners in the field and to discuss how to utilise their legislative, oversight, and representative powers to accelerate climate action in their own jurisdictions and hold governments to account.

The CPA, a founding member of the UNFCCC Parliamentary Group, was represented at the Summit in Edinburgh by a delegation consisting of the CPA Secretary-General Stephen Twigg, Hon. Claudette Buttigieg, Deputy Speaker of the Malta House of Representatives, Hon. Regina Esparon, Chairperson of the Women’s Parliamentary Caucus of the Seychelles National Assembly, and Hon. Juan Watterson SHK, Vice-Chairperson of the CPA Small Branches network and Speaker of Tynwald, Isle of Man.

Throughout the two-day Summit, delegates emphasised that legislators can and must play a role in implementing any climate commitments made at COP26 by passing appropriate legislation to deliver on the pledges. Another focus was the need for elected representatives to guarantee the right of citizens at all levels, including marginalised groups, to have a voice in climate change solutions.

Parliamentarians from across the Commonwealth were in attendance, including from India, Bangladesh, Nigeria, and Tuvalu. Hon. Mohamed Nasheed, Speaker of the People’s Majlis of the Maldives, addressed the Summit on Day 1, speaking passionately on behalf of small and climate-vulnerable jurisdictions. He reiterated the necessity of limiting global warming to 1.5°C – a target set by the 2015 Paris Agreement – warning that a failure to meet this target would leave many countries, including his own, unable to survive in their natural state.

“This summit has driven home the message that climate change is about people, not percentages – its impacts are being felt right now across communities and they’re only going to get worse. Small jurisdictions are among the most affected but also among the least able to deal with the impacts on their own. That is why COP26 and the Legislators Summit provide an opportunity to garner much-needed support from larger countries but also galvanize collaboration between small jurisdictions.”

Members of the CPA delegation addressed the plenary at various moments during the Summit. Hon. Claudette Buttigieg raised how the experience of the COVID-19 pandemic could be a catalyst for more ambitious climate action. She noted how policy and technological innovations could be developed at speed when the political will existed, as was evidenced with the vaccine rollout.

Hon. Regina Esparon highlighted the issues of balancing between sustainable development and environmental protection. She cited the experience of the Seychelles and its large tourism sector, which relies on infrastructure situated predominantly on the shorelines – the location where environmental degradation and climate change impacts are felt most.

To learn more about how Commonwealth Parliamentarians are engaging with COP26, read the CPA’s COP26 blog series on our website.