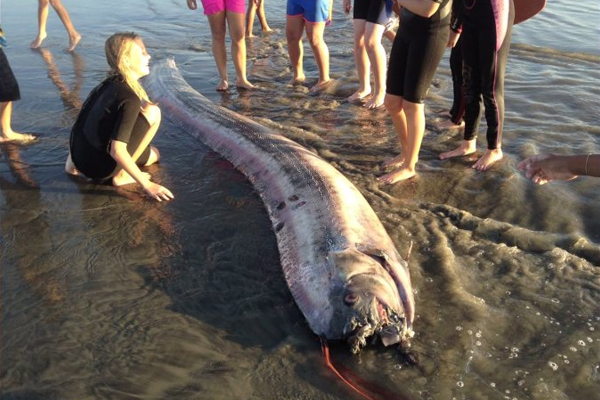 (CNN) Marine biologists have a mystery to solve: Why have the carcasses of two rare oarfish washed up on Southern California shores within a week?

Sightings of the huge deep-sea creatures — dead or alive — are unusual, because they typically swim thousands of feet below the surface.

A dead 14-foot-long oarfish came ashore in Oceanside, California, on Friday afternoon, according to an Oceanside police dispatcher. A representative of the National Oceanic and Atmospheric Administration was called to haul the serpent-like fish away for study, she said.

A group of third-graders on a beach study trip made the discovery, according to CNN affiliate KGTV.

The incident is especially puzzling because of the discovery made five days earlier by a marine science instructor while snorkeling off Catalina Island. Jasmine Santana was about 15 feet underwater when she found an 18-foot-long oarfish floating nearby.

“I was first a little scared,” said Santana, who has been working for Catalina Island Marine Institute since January. “But when I realized it was an oarfish, I knew it was harmless.”

Giant eyeball washes up on beach. It took Santana 15 minutes to drag the dead fish ashore, where 14 others helped lift the 400-pound carcass out of the water.

“I was really amazed. It was like seeing something in a dream,” said Mark Waddington, the senior captain of Catalina Island Marine Institute’s sailing school vessel the “Tole Mour” who gave Santana a hand. “It’s the first time I ever witnessed an oarfish this big.”

Discovery makes a splash: The rarest whale. Suzanne Kohin, a scientist with the National Marine Fisheries Service, was on hand Friday to take a look at the Oceanside oarfish.

“It’s so rare to find in Southern California, especially in surface water,” Kohin told KGTV. “They thought it was a very rare event the first time, so these two events that we heard of in the last few weeks are the only ones I’ve ever heard of.”

“It is believed that oarfish dive over 3,000 feet deep, which leaves them largely unstudied, and little is known about their behavior or population.”

Waddington, who has been with Catalina Island Marine Institute since 1994, said it remains unclear why the oarfish was found in shallow water this time, but it appeared to have died naturally.

Seal gives shark the slip in great white photo. Waddington said while the oarfish’s carcass is still being preserved in ice, Catalina Island Marine Institute has been sending some of its tissues and other samples to marine scientists, including Dr. Milton Love, a fish expert from University of California at Santa Barbara, to study its DNA and diet habits.