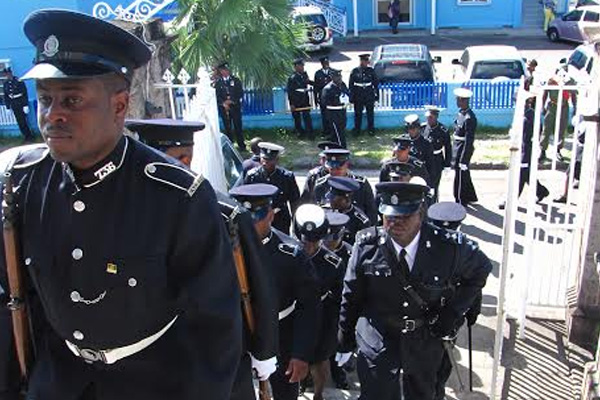 Deputy Commissioner of Police, Mr Stafford Liburd in his tribute, stated that Officer Lesley Williams provided twenty-three (23) years of dedicated service, mostly to the people of Nevis. He worked in several Police Stations in Nevis where he provided a very valuable service. Deputy Commissioner Mr Liburd recalled him as an officer with a very pronounced smile and under that smile he hid the pain and suffering that he went through in his lata years of service.

Commissioner of Police, Mr. C G Walwyn, thanked the wife, Mrs. Alvarine Neale-Wiliams and children for allowing Officers Lesley Williams to be a part of The Royal St. Christopher and Nevis Police Force and serving the Federation well.

Assistant Commissioner of Police, Mr Joseph Liburd in his tribute highlighted the strength of Constable Lesley Williams who was attached to the Gingerland Police Station. and his contribution to the Police Force. ACP Liburd recalled that Constable Williams was a superb officer who was always reliable. Even when he was not feeling well, he still fell in for duty and would make a remark like “staying at home will not make me feel better”. ACP Liburd was honoured to have Constable Williams to be a part of Nevis Division of The Royal St. Christopher and Nevis Police Force.

Corporal Macquire in his tribute memorized on the day that Officer Williams and himself arrived on St.Kitts soil to join The Royal St. Christopher and Nevis Police Force from the island of St. Vincent. Corporal Macquire boasted that they were apart of the best training course ever, which is Training Course #21. He recalled during training the facilitator, covered one of Officer Williams eye to assist in improving his shooting skills. In all, Cpl Maguire gave condolences to the family of Constable Williams and was honoured to have known, trained and work with Constable Williams.

Nevis Division of The Royal St. Christopher and Nevis Police Force gathered together and sung a song entitled “Unclouded Day” as a part of showing their final respect to Officer Williams.

The funeral service was a full military parade and he was given military honours.