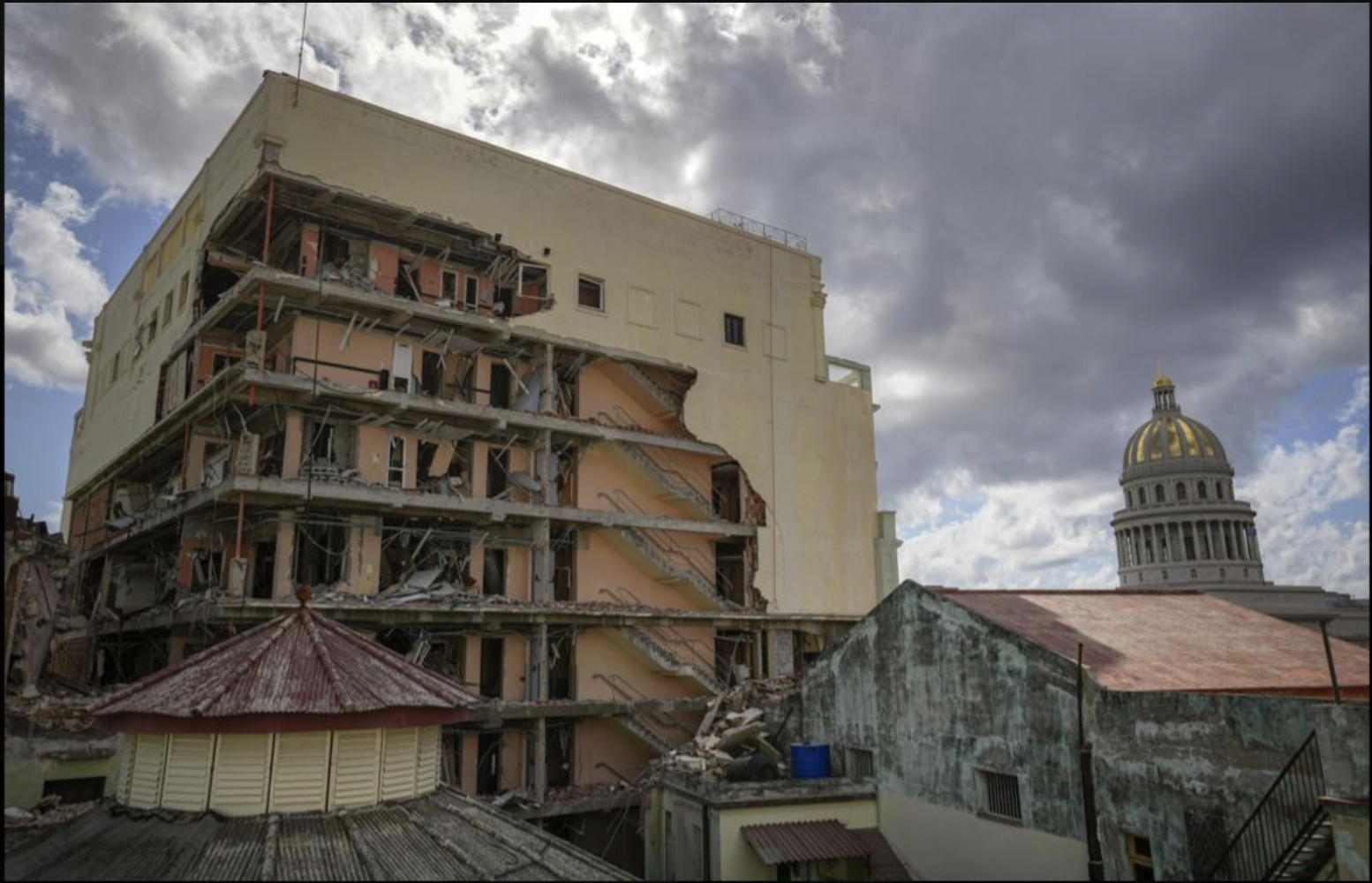 Havana, Cuba, May 12, 2022 (AP) — Alejandro Clemente González was talking with an electrician while preparing for weekend services at Cuba’s most important Baptist church when an enormous explosion shook the building and shattered the 19th-century dome towering far above the pews.

Concrete plunged from walls, wood and glass showered down from the windows as an apparent gas explosion next door killed at least 44 people in and around the devastated Hotel Saratoga in Old Havana on May 6.

“I didn’t know what was happening,” the church administrator said with a trembling voice as he revisited the sanctuary with Associated Press journalists on Wednesday. “I called on the Lord, ‘What is this, Lord? Help us!’”

He said the two men heard the cries of a receptionist as debris tumbled down around them, obstructing their path.

“I remembered that there was an exit at the back, and then the brothers who were on the third floor came down, we all met, we counted one another,” and managed to escape. All 18 people who had been inside were physically unharmed if shaken.

“Since then I have slept badly. I jump at every sound,” González said.

Parts of the upper floors have collapsed at the building that houses not only Calvary Baptist Church but a seminary and the denomination’s headquarters for western Cuba.

Sunlight glows through cracks in the outer walls, windows are shattered, their frames torn from the walls. The halls and rooms of the broken hotel are visible through a gap. A thick layer of gray dust covers the dark wood pews where hundreds meet for worship services.

The famous, elegant building now known as the Teatro Marti was just a few years old when, in 1887, Baptists began holding services across the street on a corner in Old Havana that had once held a circus. Cuba was still a Spanish colony and its Capitol building — modeled on the U.S. Capitol — wouldn’t be built nearby for a few decades yet.

The Baptists bought the property in 1889 and gradually established the church, a printing house, a school, a seminary and the headquarters that now serves about 70,000 Baptists in western Cuba. Overall, the church estimates there are about 200,000 Baptists across the whole island.

“For each believer, each Christian, each Baptist who comes, this is their home,” said the Rev. David González, 31, who has lived for the past two years in an apartment beside the church that is now partially collapsed.

Government authorities so far have focused emergency efforts on trying to find the living and the dead in and around the devastated hotel — on Thursday they reported another death — but they did meet with church officials about the status of the church.

“They transmitted to us a desire to help as much as possible,” said the Rev. Bárbaro Abel Marrero Castellanos, president of the Baptist Convention of Western Cuba. “It’s clear there aren’t all the resources needed for restoration and they also asked us to collect help, which as we know has been offered by churches in the country itself … and also in the world.”

“We still don’t know exactly the magnitude of the damage,” he said, adding that some specialists have said they might have to evaluate possibly demolishing parts of the structure.

Since the building is registered as part of the country’s historical heritage, repairs would be under the auspices of the Havana Historian’s Office, which has overseen the restoration of much of Old Havana in recent decades.

“We are actively going to involve ourselves in this process and with all the brothers, and friends who have offered to help, we hope to make a beautiful project,” Marrero said.

Meanwhile, members of the church are attending other congregations, though the government offered to help find temporary space for those from Calvary.