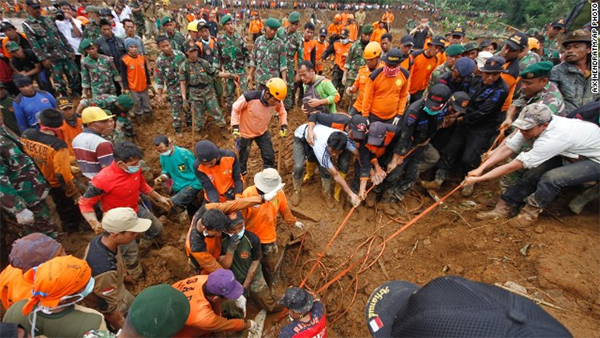 Jakarta (CNN) — The death toll from a landslide that struck a village in central Java Friday, burying dozens of homes, has risen to 39, Indonesian authorities say.

Days of heavy rains triggered a rush of mud, rocks and trees from the mountains overlooking Java’s Banjarnegara District on Friday evening.

The landslide buried at least 105 houses in and near Sampang village, the Antara state news agency reported.

At least 15 people were injured by the landslide, 11 of them seriously, and close to 600 people have been evacuated.

Video from local television showed muddy water still rushing along paths of the landslide Saturday. A wall of newly fallen earth — at least 15 feet tall, judging by the men standing at the base — blocked a paved road.

Elsewhere, people tried to gather belongings from a wooden house that had been torn open by the debris.

Still more footage showed dozens of people, some crying, gathered Friday night at a hospital where injured had been taken.

The military, local Red Cross officials, police, volunteers, and the national search and rescue agency joined in a rescue mission in the affected area, the disaster management agency said. But it was later suspended due to pouring rain.

Friday’s landslide came a day after two other slides killed two people in or near Banjarnegara District, Antara reported. One of Thursday’s slides, in Banjarnegara’s Wanayasa area, displaced more than 350 people, according to the state news outlet.

Landslides and flash floods are seasonal occurrences in the Southeast Asian archipelago, where mountainous terrain and heavy rains make for prime slide conditions.

Satellite data appears to show parts of central Java have received about 200 millimeters (7.9 inches) of rain so far this month. That would be roughly the amount that the area gets on average the entire month of December.

More showers are expected in the area in coming days.

It wasn’t clear exactly how much rain fell Friday in Banjarnegara District. But about 95 kilometers (60 miles) to the southwest, some 108 millimeters (4.25 inches) of rainfall was reported in the Java port city of Cilicap on Friday.