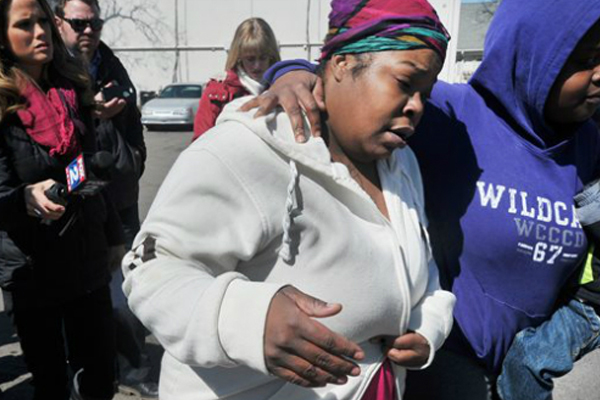 Detroit (AP) — A Detroit mother was arrested Tuesday after the frozen bodies of a boy and girl were found in a deep freezer in the family’s home, police said.

Court officers found the children’s bodies while carrying out an eviction order at the 3-bedroom home in the apartment complex just east of downtown. An autopsy will determine how they died.

Police initially reported a woman’s body was found in the freezer, but later said it was actually the bodies of the two children in a plastic bag.

The boy was about 11 and the girl was 14, said police Chief James Craig who called it a “terrible find.”

The woman was not in the apartment when the court officers or police arrived. “One of the community members here … approached our officers and advised that they knew where the parent was located,” Craig said.

The children’s mother was found in a nearby apartment and questioned. She was arrested later Tuesday. Her name has not been released.

Two of the woman’s other children, ages 11 and 17, were found at a neighbour’s home and placed in protective custody.

Neighbour and friend Tori Childs said she hadn’t seen the two dead children in about a year.

“I haven’t seen them since they were playing with my step-kids,” Childs said.

“She told me this morning, ‘Ms Carrie, if you don’t never see me again just know that I love you,'” McDonald said. “I love her. The mother is a beautiful person. She was just going through some things.”

The woman’s four children were not in Detroit schools. Friends said she was home-schooling them.

“She took her kids out of school because she thought something was going to happen to them,” McDonald said.

The woman has lived in the complex at least 10 years. She was unemployed, was having money troubles and had gotten behind on her rent. Friends knew about the impending eviction.

“She was really behind, but she didn’t have it,” Childs said, referring to money to pay the rent.

Court records show a judgment filed last month against the woman for $2,206 owed to the complex.

Investigators were preparing information to present to the Wayne County prosecutor’s office for charges. The Associated Press was unable Tuesday to determine if she has an attorney.