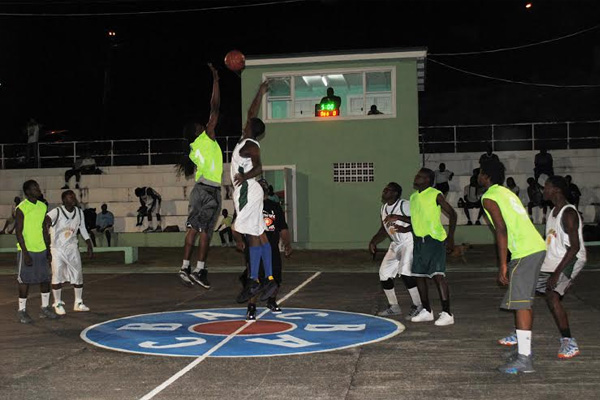 Basseterre, St. Kitts — Development Bank Challengers Exodus Basketball League opened Saturday evening (February 28) at the Challengers Hard Courts with a knockout tournament that was rained out in the second half of the first game. This segment of the tournament has been put off to give way to league games which opened Sunday evening March 1.

At half time, score was 9-1 in favour of Kittitian Hill Lions, and by the time rain stopped play into the second half, Kittitian Hills Lions were at 14 points, while Exodus Juniors had not added to their score.

According to Challengers Exodus’ Coach, Mr Jamie Harrigan, the knockout tournament will be shelved to give way for the Development Bank-sponsored league as they do not have enough time to finish it before the SKNABA fixtures open. The knockout tournament could still be played later should they find time to accommodate it.

For Lions, Delvin Marshall scored 28 points, had 14 rebounds and one block; Antony Grant – 18 points, 13 rebounds and three assists; Jouvette Leader – 16 points, 8 rebounds and 5 assists. For Hurricanes, Kayton Blake made a score of 16 points; Geron Elliot – 13 points, 2 assists, and 2 steals; while Keshawn Liburd had 2 points and 11 rebounds.

In the meantime, Federal Minister of Tourism, International Trade, Industry and Commerce, the Hon Lindsay Grant is commending the Development Bank of St. Kitts and Nevis for giving the youth an opportunity to showcase themselves by involving them in productive activities.

Speaking at the Challengers Hard Courts on Saturday evening (February 28) at the opening ceremony of the Development Bank Challengers Exodus Basketball League, which has attracted nine teams, Hon Grant said that he was glad to be a part of the league that brings communities together.

“It is good that Development Bank would be a major sponsor in this because it gives the youths an opportunity to at least not only showcase themselves but it also gives them an opportunity to be off the streets and be into something productive,” said Hon Grant.

“As you are well aware sport is a good avenue for the personal development of the youth and to keep their minds preoccupied, and so I want to commend the Development Bank for its contribution towards this initiative as it builds a lot of community support, togetherness and it augurs well for the community, so we are grateful for that.”