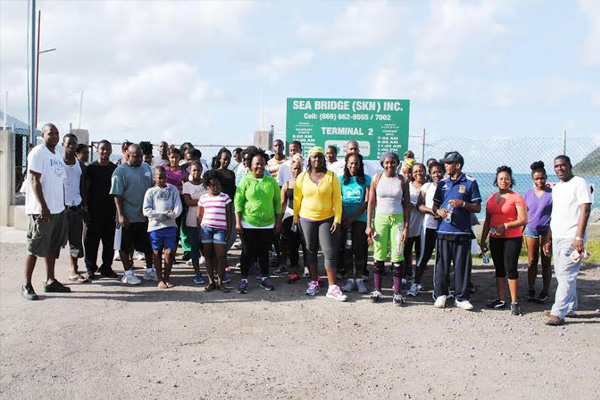 Basseterre, St. Kitts — As the Development Bank of St. Kitts and Nevis marked its 33rd anniversary, members of staff and their friends Saturday May 24 indulged themselves in a health, but stamina-sapping, exercise by walking the Peninsula Road from Frigate Bay to the Sea Bridge terminus, Major’s Bay.

The walk started at 5:10 am from the second roundabout in Frigate Bay and leading the energised staff was General Manager Mr Lenworth Harris, though first at the finish point was Credit Risk Management Officer Mr Patrice Ward, walking side by side with a guest, Ms Kimberly Phipps, who arrived at 6:41 am.

Staff had from as early as 4:00 am started assembling at the Development Bank’s headquarter on Church Street in Basseterre and were ferried in two buses to Friday Bay, where ‘house pastor’, Compliance Manager Ms Marian Browne offered a word of prayer for their protection, before they set off.

It was a mixed bag of experience as the walkers overcame the steep gradient towards Timothy Hill. Some energetic walkers breezed through it and by the time those bringing up the rear were at the top of the hill, the leaders were actually climbing the next steep gradient after Shipwreck.

While Dr Garfield Alexander had volunteered to act as the ‘walk’ doctor, he was not put to test as all the walkers (including those who occasionally hitched a ride with Mr Yohance Rawlins on the bank’s pickup) got to Major’s Bay in one piece. The only mishap was when one of the more energetic walkers, a guest, pulled a muscle minutes after eating breakfast.

Coming in second place was the group of energetic members of the Okolo Tegremantine Dance Group made up of Loans Monitoring Officer Ms Tiffany Richards, and her guests Mr Alphonso Henry and Shonroy Caesar who arrived at 6:46 am.

Hot on their heels was a lone ranger, Ms Jamela Warner, the Bank’s Finance and Creditor Relations Officer, who walked all by herself towards the end of walk, arriving at6:48 am. Former national cricketer, General Manager Mr Lenworth Harris, arrived at 7:00 am.

Bringing up the rear was the pair of Compliance Manager Ms Marian Browne and Delinquency and Recovery Manager Mr David Fox who arrived at 7:38 am and were received by General Manager Mr Harris, who congratulated them for the magnificent showing.

The event was not without its light moments. Two seemingly energetic staffers flagged down the bank’s pickup to beg a ride and inside they were trying to lie low so as not to be seen by the other walkers.

It was a colourful anniversary walk that saw the longest serving bank employee (not necessarily the oldest) Human Resource Support Officer Ms Coralee Benjamin stride majestically to the very end without hitching a ride, while the shortest serving bank employee Ms Destiny Williams (employed in January this year and also the youngest member of staff) arrived and announced that “it was a breezy, easy nice, relaxing walk.”

A sumptuous breakfast prepared by the mother and daughter team of Ms Corliss Toby and Ms Shevon Nisbett was served. Served with the breakfast were fresh fruits, an assortment of fresh juices, and hot bush tea. A smoothie that was prepared by Mr Delebert Samuel was also served.

After the breakfast, Mr Harris thanked all the staff and their friends for taking time off for the event which he termed as an accomplishment for most of them. He thanked organisers of the walk, the suppliers of food, Dr Alexander and pickup driver Mr Yohance Rawlins, a bank client.

“We are very grateful for your presence, and our members of staff and friends of members of staff who joined us,” noted Mr Harris. Also taking part in the walk was Assistant General Manager, Mr Carlton Pogson, and three staffers from the Nevis branch office.

The Development Bank of St. Kitts and Nevis was established on May 21, 1981 by an Act of Parliament, and according to the Manager for Human Resource, Marketing and Product Development Ms Danienne Brin, activities to mark the Bank’s anniversary continue on Friday May 30 with Business Fairs in Basseterre in Independence Square and outside the D.R. Walwyn Square in Charlestown, and a fun day for staff members on Saturday May 31.