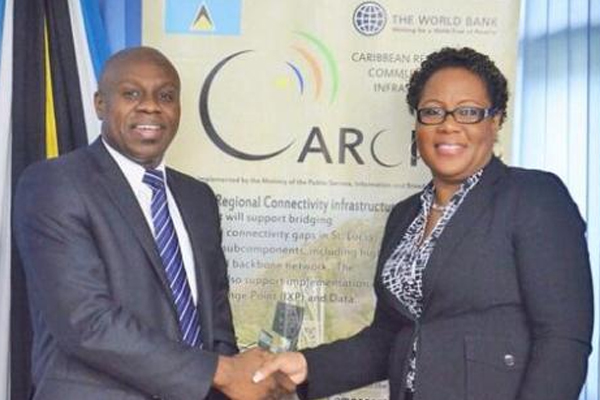 Castries, St Lucia — Saint Lucia celebrated its 35th year of independence with a bold step toward improving the quality of Internet services for its citizens. On February 28, the island joined the growing list of Caribbean Community (CARICOM) countries reaping the benefits of a local internet exchange point, or IXP.

The Saint Lucia exchange, called SLiX, was launched under the umbrella of a broader World Bank-funded Caribbean Communications Infrastructure Program (CARCIP), coordinated by the Caribbean Telecommunications Union (CTU). The IXP is a critical component of the overall project, which seeks to increase region-wide access to and uptake of broadband Internet service.

The CTU has been engaged to coordinate CARCIP, which is a partnership between the World Bank and the governments of Saint Lucia, St Vincent and the Grenadines, and Grenada. The programme aims, ultimately, to improve the efficiency of telecommunications infrastructure development and technology-driven service delivery throughout the wider Caribbean.

Through the World Bank’s International Development Association, CARCIP was allocated a total disbursement of US$25 million, including loans to the three countries and a grant to the CTU to execute a number of regional ICT-related development projects.

The groundwork for the project was undertaken by the CTU, which has been advocating the need for proliferating Caribbean IXPs since 2006. The CTU’s aggressive public education activities on IXP principles and strategic partnership with Packet Clearing House (PCH), a globally recognized non-profit institution in the field of IXP implementation, have played a significant role in the establishment of every IXP in the region.

Delivering the keynote address at the SLiX launch, Dr James Fletcher, minister of the public service, sustainable development, energy, science and technology, highlighted the link between the anniversary of political freedom and the latest celebration of technological independence.

“With the establishment of this critical component of Internet infrastructure within our own shores, Saint Lucia has taken a significant step away from dependence on foreign-based service providers,” Fletcher said.

To establish the IXP, his ministry worked with resources from PCH, which has built or supported more than one-third of the world’s 300-plus exchange points.

“The establishment of the Saint Lucia IXP is a triumph not of technology, but of the spirit of collaboration and cooperation between stakeholders in a highly competitive and restricted market,” said Christopher Roberts, local CARCIP coordinator.

“It speaks to what can be accomplished when individuals and corporations–and even competitors — agree to enter into a venture based on the recognition of common interests. What makes such an agreement possible is the realisation that such a venture benefits everyone involved.”

With SLiX, for the first time in Saint Lucia’s history, local internet service providers (ISPs) have agreed to exchange locally-destined internet traffic between their respective networks without cost.

Bevil Wooding, Caribbean outreach manager for PCH, described it as “an important milestone for the country’s growing Internet economy”, as it is expected to improve the speed, reliability, security and resilience of the local Internet.

“This new local IXP ensures that locally generated Internet traffic destined for customers on-island will now remain in-country, rather than having to go through lengthy, expensive, and sometimes insecure international routes,” said Wooding, who played an instrumental role in the process.

“Just as the declaration of independence 35 years ago came with the responsibility to build a nation, so too, the establishment of SLiX now comes with the responsibility to build the domestic Internet economy,” said McIntyre, adding that SLiX creates a pathway for the emergence of a local crop of innovators and entrepreneurs to launch applications and services that target local internet users.