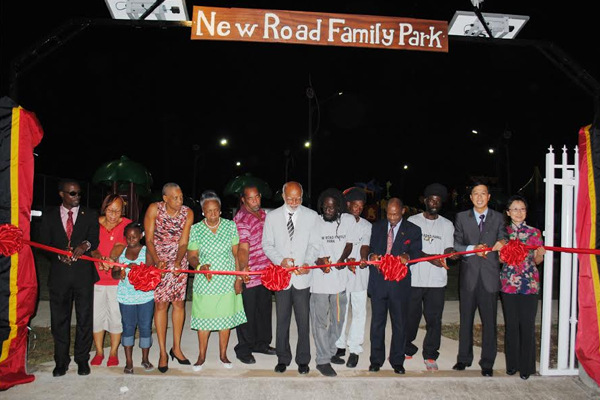 Basseterre, St. Kitts (December 18, 2014) — The official opening of the state-of-the-art New Road Family Park Wednesday evening December 17 was a demonstration of the Hon Marcella Liburd’s deep commitment to community development not only in Central Basseterre which she represents in the parliament, but the country as a whole.

“The Hon Marcella Liburd, during her campaign five years ago coined the theme, ‘Stronger Families – Safer Communities’,” said Prime Minister the Rt Hon Dr Denzil Douglas in invited comments shortly after the opening of the facility. “She has demonstrated today her deep commitment to ensure that she plays role in community development.”

Dr Douglas, talking after a brief tour of the park, noted that the opening of the park was testimony of the foresight and vision, the dedication and the execution of plans which Hon Liburd had envisaged that would advance her communities that she has had the pleasure, privilege and honour to serve as a parliamentarian.

“Central Basseterre would never be the same again, because this is one of the iconic physical built infrastructures that will always be here,” pointed out Prime Minister Douglas. “We make a very strong appeal to the residents of the area to protect it. We demonstrate yet again that this is only one of what we want to see in all of our communities around the island.”

The official opening ceremony of the park was witnessed by His Excellency the Governor General Sir Edmund and Lady Lawrence, Resident Ambassador of the Republic of China on Taiwan, His Excellency Miguel and Mrs Isabel Tsao, and Speaker of the National Assembly the Hon Curtis Martin.

“As she indicated in her own statement this evening, hundreds of feet marched through our streets – the feet of the little children, and on many occasions she said she wondered where do these children really play?” recalled Dr Douglas. “She answered her own question today when she officially opened this park.”

According to the Prime Minister, the government has seen built infrastructure in terms of community centres, playing fields, but added that there is need to make sure that it can carve out a part of those physical structures what will be of benefit to the very young, and also the benefit of those who have served and who are now advanced in years.

“These are the people who need to come out from time to time in the park and relax, exercise their joints so that they would be able to be more ambulatory and thus as we would say, continue to move and to enhance the health of their living and thus extend their lives,” said the Prime Minister who is a medical doctor, and the lead spokesperson for health in CARICOM.

Dr Douglas, as well as the Governor General His Excellency Sir Edmund Lawrence, to the amusement of those present, used some of the equipment aimed at the older citizens and successfully did so. The Prime Minister went further to amaze the onlookers when he successfully walked on the balancing equipment.

“If I were living here I would be here in this park every day,” pointed out the Prime Minister. “I will not make it every day but I shall definitely make it may be at least once per week to just come here and unwind, sit down in the evening and relax, look at the ships in our harbour and observe the thrill of the jets landing bringing hundreds of our visitors and our own people – the thrill also of seeing them take off.”

Indeed, as the Hon Marcella Liburd was delivering the feature address, a British Airways Boeing 777 jet thundered in the background as it took off for an eight-hour intercontinental flight to London Gatwick in England (with a brief stop in Antigua) on one of its two weekly flights. The other flight is on Saturdays.

The New Road Family Park, which according to the Hon Marcella Liburd is still a work in progress, was built with the financial assistance of Taiwanese Government, and in this regard Prime Minister Douglas said: “The Taiwanese have been excellent partners because they have made it possible to bring life to the vision of Marcella.

“Marcella is endeared by the people of this community for this particular project.”