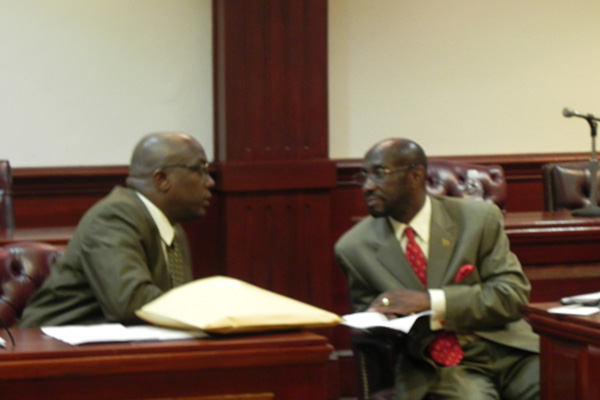 Dr. Harris did not adhere to the established procedure and now attempts to convey a false impression

(CUOPM) – The Ministry of Foreign Affairs, Homeland Security, Labour, Immigration and Social Security has responded to an allegation by Dr. the Hon. Timothy Harris that his diplomatic passport was withdrawn without him being officially notified and without him being asked to return the document.

“Diplomatic passport DE 0000064 issued on May 8, 2012 to the Honourable Dr. Timothy Harris during the period when he served as a Minister in the Federal Cabinet was rescinded following its non-return to the Ministry as is the standard practice. The action taken is consistent with Section 3 (2) of the Passport and Travel Documents Act, Chapter 6.04 which grants the Minister discretionary authority to cancel or withdraw the various classes of passports at any time,” the statement from the Ministry said Tuesday.

The Ministry said it has been aware that the “Honourable Dr. Timothy Harris has on numerous occasions following termination of his services used the document bearing his former designation of Minister to travel to a number of countries including Canada. The Honourable Dr. Timothy Harris has done so being very much aware that such is in fact contrary and inconsistent with the intent of the legislation and is certainly counter to accepted standards in diplomatic relation.”

“By his continued use of the passport, the Honourable Dr. Timothy Harris has in fact on his numerous trips abroad purported to possessing a status which he no longer enjoys, in light of termination of his services as a Minister,” it said.

The statement statement said: “Having served as a Minister of Government for eighteen years, and having occupied the portfolio as Minister of Foreign Affairs, Dr. Harris is knowledgeable of the procedures governing the issuance and/or recall of diplomatic passports. The document rescinded by the Ministry was to be returned by Dr. Harris. Dr. Harris has not complied and continued using the documents to facilitate his personal travels.”

The Ministry said it will continue to assist all Parliamentarians in securing the relevant travel documents according to their status.

“It is regrettable and unfortunate that the Honourable Dr. Timothy Harris elected not to adhere to the established procedure and is now attempting to convey the false impression that the actions of the Ministry were intended to victimize him,” the statement said.