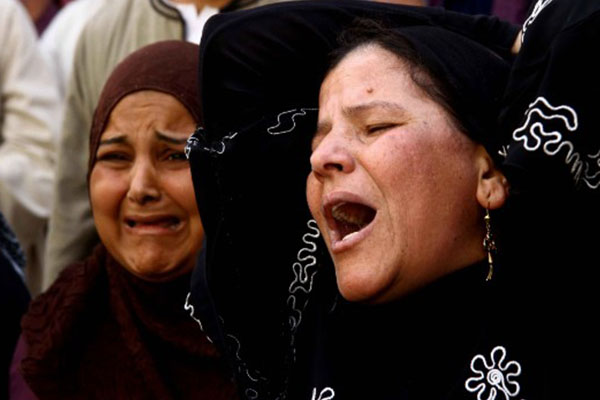 (CNN) — An Egyptian court has sentenced the leader of the now-banned Muslim Brotherhood and hundreds of supporters to death, state television said Monday.

Intensifying a crackdown on the Islamist movement ahead of elections next month, the same court also handed down a final capital punishment ruling for 37 others.

Charges in both cases, which were tried by the same judge, are related to violent riots in the central Egyptian city of Minya in August.

A police officer was killed during the violence, which followed a deadly crackdown by security forces on two Cairo sit-ins being held by supporters of former Islamist President Mohamed Morsy, who was ousted last July.

Mohammed Badie, the Brotherhood’s leader, is among 683 supporters of Morsy whose death sentences are not final — as the case has been referred to the nation’s grand mufti, Egypt’s highest religious authority, for review.

The official website of the Muslim Brotherhood said Morsy’s son, Osama, attended Monday’s court session. It quoted him for Badie’s reaction after the death sentence was read out.

“If they hung us a thousand times God will never detract from what it is right,” Badie reportedly shouted. “We will not tremble because death in the name of Allah is faith. May Allah accept.”

In the second case, relating to 529 Muslim Brotherhood supporters sentenced to death last month, the judge upheld 37 death sentences. The others saw their sentences commuted to life in prison.

Most of the people sentenced are being tried in absentia. All defendants are still permitted to appeal.

The sentences “put an end to the myth of independence of the judiciary” and “are solely based on direct orders from the coup masterminds who deposed the legitimate elected President for personal interests,” said Gamal Heshmat, a member of the Muslim Brotherhood’s Shura Council — its highest advisory body. “There is no justice, no legal system in Egypt any more. Lawsuits are now turned into political battles, where the ruler seeks revenge against honorable patriotic citizens.

“These judgments are worthless,” he said in a written statement. “We will not be intimidated. We will not abandon the Revolution raging in the street, and which assures the whole world that there is no justice in Egypt.”

U.N. Secretary-General Ban Ki-moon “is alarmed by the news” of the mass death sentence, his spokesman said. “Verdicts that clearly appear not to meet basic fair trial standards, particularly those which impose the death penalty, are likely to undermine prospects for long-term stability,” which is “essential for the overall stability of the entire North Africa and Middle East region.”

Ban is “concerned” about the case and “intends to discuss these concerns and other issues with the Minister for Foreign Affairs of Egypt Nabil Fahmy later this week,” the spokesman said.

In an early reaction from a Western government, Swedish Foreign Minister Carl Bildt wrote on Twitter that the mass trials were an “outrage.”

“The world must and will react!” he said.

Egypt has faced turmoil since the uprising that toppled longtime leader Hosni Mubarak in 2011. Since the army removed Morsy, the country’s first freely elected leader, from power last July, Egypt has suffered the worst internal strife in its modern history. Morsy and other Brotherhood leaders were rounded up soon after his removal from office.

Cairo’s military-installed government has branded the Brotherhood a terrorist group, an allegation it denies.

The Brotherhood insists it remains an entirely peaceful organization, but it is accused of being behind a wave of deadly attacks on the police and military.

A separate militant group, Ansar Beit al-Maqdis, which the United States has designated a terrorist group, has been blamed for attacks in Egypt’s Sinai Peninsula. It claimed responsibility in January for four blasts that killed at least six people in and around Cairo.

A Cairo court ordered a ban on all activities of the secular pro-democracy April 6 Youth Movement on charges of espionage and defaming the state, state media reported.

The Cairo Court of Urgent Matters also ordered the seizure of the group’s premises. The movement helped ignite the uprising that toppled Mubarak. The ruling can still be appealed.

In a response to the court decision, the group said its activities were peaceful.

“April 6 is an important part of this generation’s voice and dream,” it said in a statement posted on its Facebook page. “We will continue our activities, expressing our opinions, and raising our voice as we please.”

The Muslim Brotherhood’s London office issued a statement slamming the sentencing of its protesters to death as well as the Cairo court’s ban of the youth movement.

“Today’s unprecedented verdicts represent a complete disregard of Egyptian and international human rights laws and due process,” the statement said. “The world can longer afford to stay silent on such gross human rights violations and injustice committed by the military junta in Egypt against its own people.

Abdel Fattah el-Sisi, the general who led the outster of Morsy, is expected to easily win presidential elections on May 26-27 in a country long ruled by men from the military.