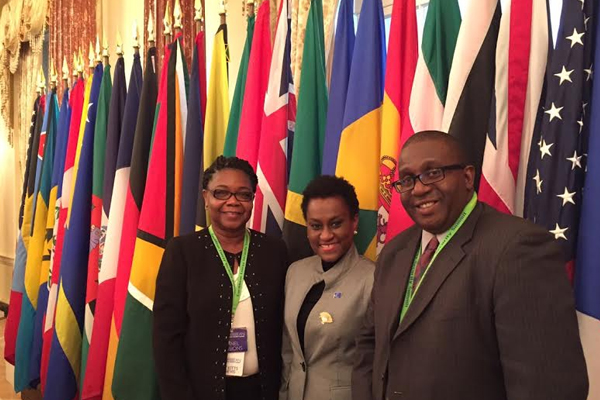 Basseterre/Washington — St. Kitts and Nevis is being represented by a three-person delegation at the invitation from United States Vice President the Hon. Joe Biden to participate in a regional summit on Energy Security being held in Washington.

The delegation members are Permanent Secretary in the Ministry of Energy, Mr. Lenny Lake; St. Kitts and Nevis’ Ambassador to the United States Her Excellency, Mrs. Jacinth Henry-Martin and the Deputy Director at the World Bank Mrs. Janet Harris.

Vice President Biden met with leaders of Caribbean nations Monday, saying the U.S. would do what it could to help those countries revamp their energy sectors, a vital concern given the region’s dependence on oil shipments from ailing Venezuela.

The summit, which followed the launch last year of the Caribbean Energy Security Initiative, was designed to help Caribbean nations on the road toward energy security. Caribbean leaders agreed to pursue comprehensive and diversified energy programs, including the introduction of cleaner forms of energy.

According to the White House, the United States’ Overseas Private Investment Corp. will boost its focus on developing clean energy projects in the Caribbean, and U.S. officials have identified a team designed to identify promising Caribbean energy projects.

The Washington Summit is a follow up to a similar meeting held in 2013 in Trinidad and Tobago and is aimed at providing a forum for advancing hemispheric mechanisms in promoting clean energy development in the region at a time of volatility in regional and international energy markets.

The meeting also comes against a background of increasing focus on development of the regions renewable energy supplies and attention on implementing policies and measures for meeting international climate change emission targets.

Several Caribbean leaders are in the US Capitol for the meeting, which is expected to issue a broad statement of principles intended to promote a cleaner and more sustainable energy future for the Caribbean.

Caribbean leaders are also scheduled to follow up with the US Vice President and US administration officials on a number of other areas of regional concern relating to the region’s economic competitiveness, human resource development, and citizen security.

The Washington summit is being attended by a number of other bilateral and multilateral development partners including the Caribbean Development Bank and the Inter-American Development Bank, the European Union, and the OAS as well as the OECS and CARICOM secretariats.