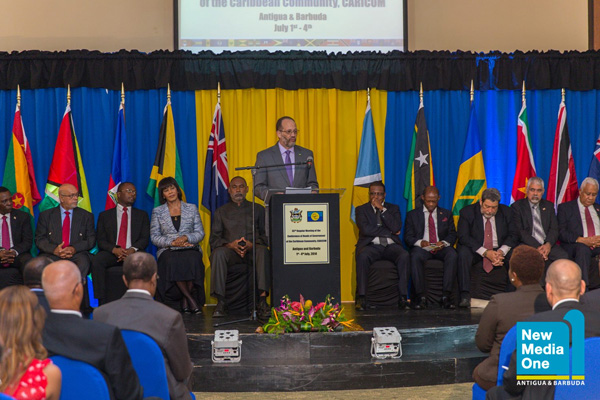 St John’s, Antigua — Even as the present cohort of Caribbean Community (CARICOM) leaders returned to the place where political leaders in 1965 defined the integration ideals, CARICOM Secretary-General Irwin LaRocque on Tuesday stressed the urgency of finding solutions to the economic conditions that threatened to erode gains the Community has made.

LaRocque made this appeal at the historic Dickenson Bay, Antigua and Barbuda, the venue of the 35th meeting of the conference of heads of government of CARICOM, urging political leaders of this day to find collective solutions to the serious challenges the region faced.

The vulnerabilities of the small economies of CARICOM and the lingering effects of the global economic and financial crisis have combined to impede the region’s ability to compete internationally and have resulted in “stubbornly low” growth rates, LaRocque told the opening ceremony of the four-day Conference.

Strengthening the call for urgent collective action, the secretary-general said that heavy debt burden and falling fiscal revenues, leave CARICOM governments “with precious little room to manoeuver” in the face of what he described as a “misleading criterion” of per capita income, applied by international financial institutions, to graduate CARICOM countries from access to “much needed” concessionary development financing.

“Never before in recent history, have so many of our member states faced such challenges at the same time for such a protracted period,” he said, adding an important footnote that neither the economic and financial crises nor the causes of climate change, another major challenge, originated in the region.

Adding an element of hope in the face of those trials however, he said that as formidable as the challenges were, the Community’s history clearly showed that it has never been daunted.

“It is now, in this period of acute economic stress faced by our region, that the spirit of unity which brings us together in all forms of adversity, is infusing our actions as we seek to build the Community’s resilience to withstand the shocks, whether they are economic, social or climatic,” LaRocque stated.

He said that the region was looking to consolidate and reposition the integration process in an ever changing environment, as he welcomed Gaston Browne, new prime minister of Antigua and Barbuda to the helm of the conference of heads of government of CARICOM.

“Our initial exchanges have demonstrated to me quite clearly your personal commitment to the advancement of integration which is in keeping with your country’s prominent historical role in the pursuit of Caribbean unity,” he told the new chairman, adding his commendations to Dr Ralph Gonsalves, prime minister of St Vincent and the Grenadines, for his stewardship over the past six months.