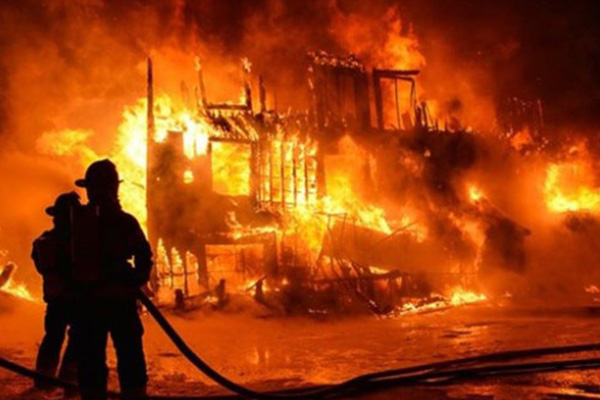 (CNN) — A fire swept through an apartment complex for the elderly in the small Quebec town of L’Isle-Verte early Thursday, killing at least five and leaving roughly 30 others unaccounted for, police said.

Frigid temperatures have made search efforts difficult, police Lt. Guy Lapointe said hours after the fire began. Water used to fight the blaze has frozen into ice, he said, trapping pockets of fire, and possibly victims, in the collapsed three-story building.

Police said they fear some of the missing were in the burned and frozen remains of the 52-unit Residence du Havre, situated in the town of about 1,400 people near the St. Lawrence River northeast of Quebec City.

Authorities were still struggling to figure out exactly how many people were in the building when the fire hit.

“We need to establish who was there, who wasn’t, and find out exactly how many people were inside at the time of the blaze,” Lapointe said.

The fire, reported around 12:35 a.m., destroyed the building. About 20 people escaped — some were taken to a hospital, and others to a nearby school, she said.

“We hope some of those missing went to family members or something like that and report to us later on,” Quebec provincial police Sgt. Audrey-Anne Bilodeau said. “The others are likely still inside the burned building.”

Officials were calling residents’ relatives to try to determine the whereabouts of the missing.

Emergency personnel worked in temperatures well below freezing. The temperature in nearby Riviere-du-Loup was -22 C (-7 F) at 7 a.m. ET, according to Environment Canada.

A man who lives nearby, Pascal Fillion, told CBC News that his roommate woke him up around 1 a.m., and they went outside to see the fire.

“It wasn’t a normal house fire, it was like a sheet of paper … it was so intense,” Fillion told CBC News. ”

He said he heard screams coming from inside, but firefighters could do little because of the fire’s intensity.

“There was one person we saw, who they wanted to save, but he was on the top floor, and with the fire and the wind they weren’t able to come any closer,” he said.

Residence du Havre served both autonomous seniors and those who required an assisted-living arrangement, according to its website.

Canadian news agency CTV quoted the town’s acting mayor, Ginette Caron, as saying just five of the residents were fully autonomous, but most were not able to move around on their own. Some, the mayor said, had Alzheimer’s disease.

Lapointe said the cause of the fire wasn’t immediately clear. He said he didn’t know what kinds of safety measures, such as sprinklers, the complex had.

“I have every confidence in the ability of the authorities to determine how this tragedy occurred and to take the necessary steps to prevent it from occurring again,” he said in a statement.