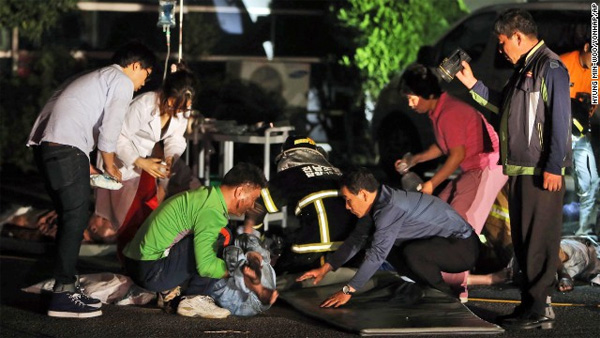 Seoul, South Korea (CNN) — A fire broke out at a South Korean hospital for the elderly early Wednesday, killing 21 people — most of them patients in their 70s and 80s who had difficulty walking.

Police said that after examining video footage, they had detained a patient suffering from dementia whom they suspect of starting the blaze in the southern county of Jangseong.

The man, who is in his early 80s and was identified only by his surname of Kim, denies causing the fire, said Roh Gyu-ho, the head of Jangseong Police Station.

The fire started shortly after midnight in an annex building of the hospital where scores of patients in fragile states were staying.

Many of them were suffering from Alzheimer’s disease, complications from strokes or other chronic diseases, the national news agency Yonhap reported, citing police and fire officials.

Although the fire was put out quickly, many of the victims, unable to move around easily, were believed to have been killed by asphyxiation from toxic fumes that filled the second floor of the two-story building.

Twenty patients and a nurse died, the National Emergency Management Agency said, and eight people were injured, six of them seriously.

The head of the hospital, Lee Hyong-seok, apologized Wednesday in front of television cameras.

Police said they had closed-circuit television footage from the second floor of the annex building that led them to apprehend Kim as the main suspect. He was admitted to the hospital on May 1, Roh said.

South Korea was shaken last month by the sinking of the ferry Sewol off the country’s southwestern coast, which left more than 300 people dead or missing, most of them high-school students on a field trip. The accident has focused attention on shortcomings in safety standards in South Korea.

On Monday, a fire at a bus terminal in Goyang, near Seoul, killed eight people and injured dozens more.