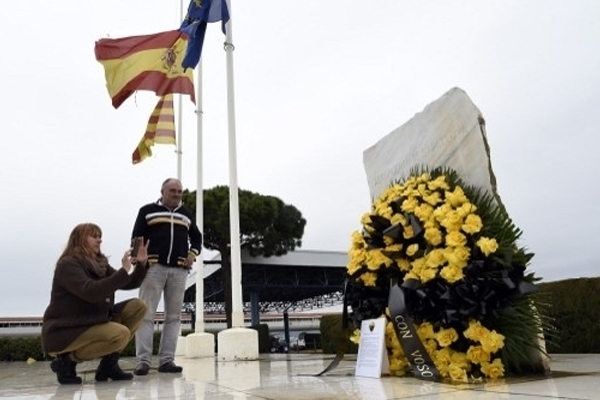 Madrid, Spain (AFP) — Flags flew at half-mast, meetings were cancelled and workplaces fell silent Wednesday as Spain mourned the 150 people, including at least 49 Spaniards, killed in a plane crash in the French Alps.

A minute’s silence was observed at noon at countless points around the country, including both houses of parliament in Madrid and public offices.

At Barcelona’s El Prat airport, where the doomed Germanwings flight took off on Tuesday, staff also stopped working and stood in silence for one minute.

Spain’s junior security minister Francisco Martinez told a news conference that 49 Spanish victims had been identified so far, but said it was a “provisional” figure.

He was to meet German Chancellor Angela Merkel and other leaders near crash site in an inhospitable area of the southern French Alps.

The tragedy led Rajoy to fly with one of his fiercest political opponents: Catalan regional leader Artur Mas, whom he picked up in Barcelona on the way to France.

Rajoy and Mas have clashed for months over Catalonia’s demands for independence but on Wednesday they were to share a one-hour flight to Marseille before driving to the scene of the crash.

Among the flags at half-mast across Spain was one atop the grand facade of Barcelona’s opera house, the Gran Teatre del Liceu.

Two star opera singers who had just performed there in Richard Wagner’s “Siegfried” died in the crash.

The Liceu and the Teatro Real opera house in Madrid both scheduled a minute’s silence at noon.

Spain declared three days of mourning and King Felipe VI cut short his first state visit to France on Tuesday just minutes after it began when he heard news of the tragedy.

French leaders said no one on board survived when the Airbus A320 operated by Lufthansa’s budget airline Germanwings crashed on Tuesday.

Lufthansa said it was working on the assumption that the crash was an accident.

A big black ribbon filled the front page of Catalan newspaper ARA and the same symbol appeared on the screen on Spanish public television and various Twitter accounts.

Germanwings said there were at least 72 Germans on board, among them 16 school pupils and two teachers who had been in Spain for an educational exchange.

The school visited by the German pupils in Catalonia held a private ceremony for the victims.

In the Mediterranean city of Malaga, the directors of the Tabacalera cultural centre cancelled the press launch of a new museum, an annex of the State Russian Museum.