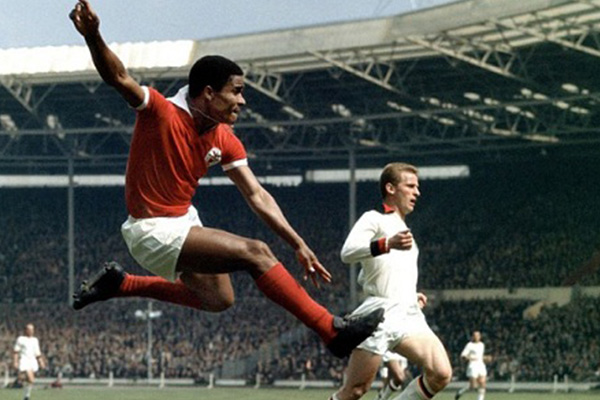 LISBON, Portugal (AP) — Eusebio, the Portuguese soccer star who was born into poverty in Africa but became an international sporting icon and was voted one of the 10 best players of all time, has died aged 71, his long time club Benfica said.

He died Sunday, the club announced on its website, without providing further details.

Eusebio died at home of heart failure at 3.30 am Sunday, his biographer, Jose Malheiro, said. “His health was very poor,” Malheiro told reporters. Eusebio was admitted to hospital several times over the past year for the treatment of heart and respiratory problems.

Cristiano Ronaldo, the Portugal captain who plays for Real Madrid, commented on his Facebook page, “Always eternal Eusebio, rest in peace.” Former Portugal captain Luis Figo, the 2001 FIFA world player of the year, tweeted, “The king!! Great loss for us all! The greatest!!”

“On this sad day of (Eusebio’s) death … I prefer to look upon him as immortal,” Chelsea’s Portuguese coach Jose Mourinho told RTP.

Eusebio da Silva Ferreira became affectionately known as the Black Panther for his athletic prowess and clinical finishing that made him one of the world’s top scorers during his heyday in the 1960s for Benfica and the Portuguese national team.

Perhaps his biggest accomplishment was to lead Portugal to a third-place finish at the 1966 World Cup, but his agility and speed made him one of Europe’s most dangerous forwards for most of a career that lasted two decades.

He was awarded the Ballon d’Or in 1965 as Europe’s player of the year and twice won the Golden Boot — in 1968 and 1973 — for being top scorer in Europe. According to football’s world governing body FIFA, he scored 679 goals in a total of 678 official games.

Tributes poured in from around the football world. FIFA President Sepp Blatter tweeted “Football has lost a legend. But Eusebio’s place among the greats will never be taken away” while German great Franz Beckenbauer also took to Twitter to comment “One of the greatest football players ever has passed away.”

None of Eusebio’s goals were more famous than those he netted against North Korea in the quarterfinals of the 1966 World Cup. With Portugal trailing 3-0, Eusebio inspired his team’s turnaround with four goals and an eventual 5-3 victory.

While Portugal went on to lose to host and eventual champion England in the semifinals, Eusebio became even more popular at home when he wept openly as he left the field following the defeat.

He finished as the tournament’s top scorer with nine goals. In 1998, a panel of 100 experts gathered by FIFA named him in its International Football Hall of Fame as one of the sport’s top 10 all-time greats.

“Look, there are only two black people on the list: me and Pele,” Eusebio commented on the honour, referring to the Brazilian great who was a friend. “I regard that as a great responsibility because I am representing Africa and Portugal, my second homeland.”

Eusebio was born in Maputo, the Mozambican capital, during the Second World War when the southeast African country was still a Portuguese colony. He came from a poor family but sparkled for his local team and was lured by Benfica to Portugal when he was 18.

Known for his unpretentious and easy manner as well as his courage and ball skills, his popularity in Portugal was such that in 1964, when Italian clubs offered to buy Eusebio for sums that were astronomical for the time, the country’s then-dictator, Antonio Salazar, decreed that the player was a “national treasure” — meaning that he could not be sold abroad.

“A football genius and example of humility, an outstanding athlete and generous man, Eusebio was for all sports fans and for all Portuguese an example of professionalism, determination and devotion to the colors of the national jersey and of Benfica,” Portuguese Prime Minister Pedro Passos Coelho said in a statement.

In a playing career unparalleled in Portugal, Eusebio was a cornerstone of the Benfica team that won back-to-back European titles in the early 1960s.

In an epic European Cup final against Real Madrid in 1962, when a first-half hat trick by Ferenc Puskas looked like it would be enough to secure the trophy for the Spanish club, Eusebio scored the last two goals as the Lisbon team came back to win 5-3 and clinch Benfica’s second straight continental title.

With Benfica, he won 11 Portuguese league titles and five Portuguese Cups, and remains the club’s best-known player. A bronze statue of him, poised to kick a ball, stands outside Benfica’s Stadium of Light where fans began laying flowers after his death was announced.

But his display in the game against North Korea had already immortalised him to most Portuguese fans.

In that quarterfinal at Goodison Park in Liverpool, Portugal made a nightmare start and was three goals down after 23 minutes.

“We were taken completely by surprise,” Eusebio told The Associated Press at the 2010 World Cup in South Africa, where the Portuguese had a second meeting with the North Koreans 44 years after the first.

“I remember very clearly what (teammate Antonio) Simoes said when we were 3-0 down. He kept saying, ‘As long as we don’t go four goals down, we’re still in with a chance,'” Eusebio said. “And he was right.”

After his first two goals, he picked the ball out of the net, ran back to the halfway line and placed it in the centre spot for the restart. He completed his hat trick with a 56th-minute equalizer before scoring his fourth from the penalty spot as North Korea’s defence fell apart amid the onslaught.

“That was the best game of my life in a Portugal jersey,” Eusebio said. “It left its mark on me.”

After five knee operations, he played his last game for Benfica in 1975.

Eusebio then moved to North America where he spent the last years of his career playing for the Boston Minutemen, Toronto Metros, Las Vegas Quicksilver and Buffalo Stallions through 1980.

Eusebio stayed on at Benfica as an assistant coach after his retirement and travelled widely with the Portuguese national side as a paid “soccer ambassador.”

Eusebio is survived by his wife, Flora, two daughters and several grandchildren.