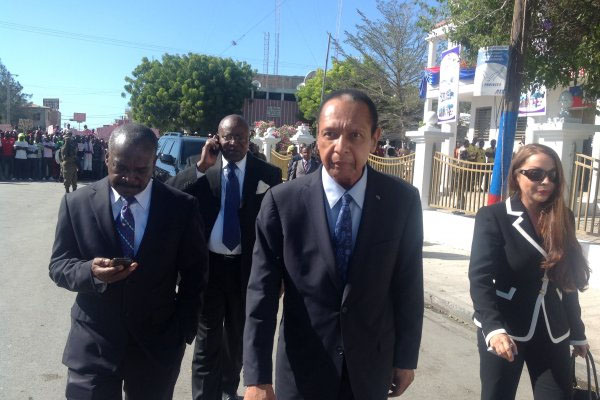 Port-Au-Prince, Haiti (HCNN) — Haiti’s former dictator Jean-Claude ‘Baby Doc’ Duvalier died on Saturday, possibly of a heart failure, after he collapsed and hit his head while visiting a close ally near the Caribbean country’s capital.

Sources close to the family told HCNN that Duvalier, 63, was at the home of retired Col. Joseph Baguidy when he died of what could be a heart failure.

“Duvalier stood up. Then he said, ‘Oh! I feel dizzy!’, and then he collapsed and hit his head,” an ally who said he witnessed the scene told the Haitian-Caribbean News Network (HCNN), on Saturday.

“We moved to call Haiti air ambulance to try to save his life, but he had already passed away,” said the source who spoke to HCNN on condition of anonymity.

According to medical sources, Baby Doc’s death could have a result of a head trauma or his dizziness and collapse might have been due to an end-stage heart disease.

Duvalier was regularly seeing his doctor over the past months for heart problems, according to a medical source close to the family of the ex-dictator.

Baby Doc was also admitted at a private hospital over the past couple of weeks after complications arose from a minor injury he had to his foot, since he was diabetic, HCNN has learned.

Francois Duvalier, who was working as a medical doctor before becoming president in 1957, had been accused of summary executions, political disappearances, acts of torture and other serious human rights abuses, including crimes against humanity. Many of the same abuses and crimes continued under Baby Doc’s regime.

Jean-Claude Duvalier, who was, as his father auto-proclaimed “president for life”, has been accused of financial crimes, human rights abuses and even crimes against humanity.

Judge Carves Jean, who was conducting the criminal inquiry into Duvalier’s case, had indicted Duvalier only for financial crimes, arguing that common law crimes and human rights abuses blamed on Duvalier could not be prosecuted because of a statute of limitations.

The judge also argued that there was no provision in Haitian law to prosecute people for crimes against humanity.

However, the capital’s Court of Appeals issued a recent ruling that had reopened the possibility to prosecute Duvalier for crimes against humanity, but his death now, of course, puts an end to all criminal proceedings against him.