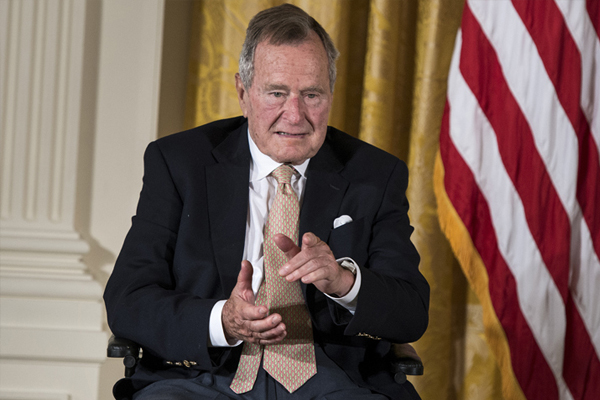 “President Bush was taken by ambulance to the Houston Methodist Hospital as a precaution after experiencing a shortness of breath earlier this evening,” his spokesman Jim McGrath said.

“The former president, age 90, will be held for observation, again as a precaution.”

The 41st US president and the oldest of the four living former US presidents, Bush has seemed frail in recent public appearances, and is often seen in a wheelchair.

He was well enough, however, to celebrate his 90th birthday last June, to make an assisted parachute jump out of a helicopter near his family retreat in Kennebunkport, Maine.

That tandem skydive jump was Bush’s eighth, with the first on September 2, 1944 ? when he was shot down over the Pacific island Chi Chi Jima as a pilot in World War II.

Bush was previously treated at Houston Methodist in November 2012 for bronchitis, and ended up spending nearly two months as a patient there.

The former president’s wife, Barbara Bush, nearly one year ago was admitted to the same Houston hospital where he is being treated.

Suffering from pneumonia, the former first lady was released from the hospital in January of this year.