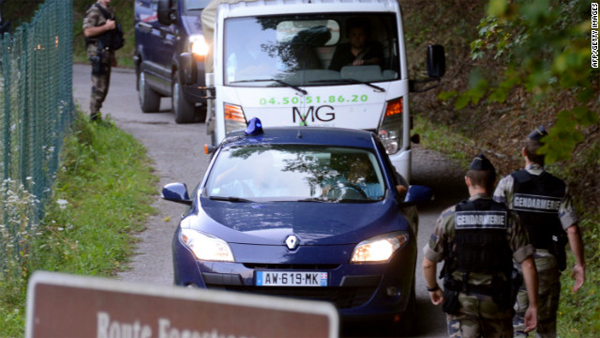 (CNN) More than a year after the mysterious execution-style slaying of four people in the French Alps, investigators say they’re looking for a motorcyclist in connection with the case. A French police sketch released Monday shows a bearded man wearing a dark motorcycle helmet.

Police said the man was seen between 3:15 and 3:40 p.m. September 5, 2012, near the parking lot in a mountainous and wealthy area of eastern France where the four victims were found dead last year.

The case made headlines across Europe as speculation surged over the brutal killings.

A prosecutor said all four victims — a husband and wife, her mother and a French cyclist — were shot at least three times, including in the head.

The 7-year-old was beaten and shot in the attack and rescued by a British cyclist who came upon the scene.

At the time, the French prosecutor leading the investigation said she could be a key witness in the case.

Authorities didn’t reveal what led them to release the sketch Monday but said they wanted to make contact with the motorcyclist “or any person who may have information about him.”

“Attention should be paid to the helmet described by witnesses as black or dark with a lateral opening around the chin,” police said. “The only helmet on the market that fits this description is a GPA HELMET ISR.”

Police in England arrested a 54-year-old man in connection with the case in July.