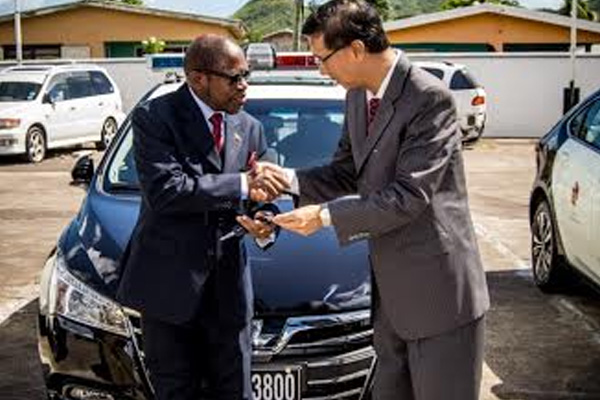 The Luxgen model sedans were provided by the Republic of China (Taiwan) during a ceremony at the Police Training Complex. Taiwan’s Resident Ambassador His Excellency Miguel Tsao said that these vehicles are identical to those used by police in Taiwan. He highlighted his country’s excellent relations with the twin-island Federation describing the partnership as “the best” among its diplomatically aligned countries. Ambassador Tsao referred to the security chiefs and the rank and file and commended them for safeguarding the nation.

“You are certainly the best and closest friend of every citizen in St. Kitts and Nevis for what you are doing is laying a solid foundation for our safety,” he stressed. “As a diplomat, as a foreigner, resident and your friend, I would like to express my heartfelt appreciation for your indomitable sacrifice and service.”

“We stand today as two nations, two fully democratic nations committed to the mutual advancement of each other and of course committed to affirming both regionally and internationally the positive and constructive role that the other is playing,” he emphasized. “Today ladies and gentlemen, we have yet another example of the interest and involvement of which I just referred.”

In his capacity as the Minister responsible for the police, Prime Minister Douglas outlined that peace and stability are important objectives of any nation.

“The Royal St. Christopher and Nevis Police Force has undertaken quite a focussed and effective campaign of law enforcement and crime fighting in recent years,” he stressed. “And with a few regrettable exceptions, the force has had a dramatic and much welcomed impact in (reducing) the level of criminal activity in our Federation.”

“Mobility as we know is key to effective law enforcement. Response time is an important component in the maintenance of law and order and police vehicles are key to both mobility and response time in this 21st century.”

As such, the Prime Minister encouraged the officers to take good care of the vehicles as they will significantly enhance the operational capability.