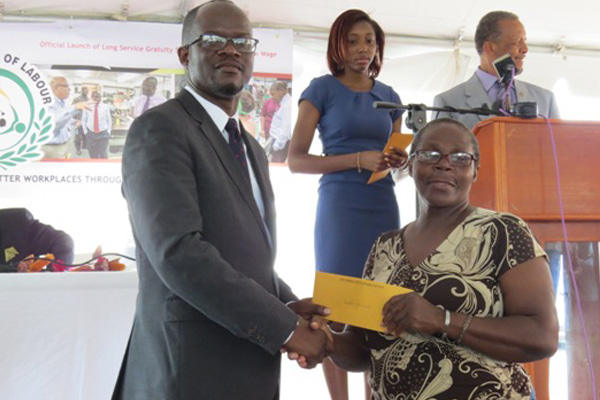 Government’s agenda is to enhance quality of life of workers

Basseterre, St. Kitts (CUOPM) — Minister of Labour, the Hon. Patrice Nisbett said the ministry is committed to play its critical role in the formulation of an agenda to enhance the quality of life of working people in St. Kitts and Nevis.

Speaking at the recent ceremony to officially launch the implementation of the New National Minimum Wage and the Long Service Gratuity Scheme on the C. A. Paul Southwell Industrial Park, Minister Nisbett noted when he was given the ministry by Prime Minister the Rt. Hon. Dr. Denzil L. Douglas the directive was to that workers in the lower income strata, in the Industrial and Manufacturing Sectors and the Hospitality Sector must be acknowledged for their dedication and the time as well as those whose shoulders rest the continued economic vitality and viability of the state be justly and tangibly acknowledged.

“And he held then that the minimum wage must be reviewed and that a new social protection scheme be designed to assist those, who at the end of their working lives, or in transition between jobs, as a result of the opportunities spawned in the economy to be compensated, especially so in the absence of structured pension plans thus, the concept of the Long Service Gratuity was born,” said Minister Nisbett.

He said he was justifiably proud as the Minister responsible for the Labour Portfolio to stand in the street named after one of the past hard working persons, the late Ebenezer Edmeade and in the venerated C. A. Paul Southwell Industrial Estate to announce come 1st November 2014, the new minimum wage in the Federation of St. Kitts and Nevis will be pegged at $9.00 per hour/$360.00 per 40-hour week.
“The Government just recently enacted in Parliament provisions to increase the threshold on the amount taxable on the Social Services Levy from $16,640.00 to $18,720.00. Those earning the minimum wage would not have to pay the social service levy,” said Minister Nisbett.

In relation to the Long Service Gratuity Scheme now being implemented, Minister Nisbett disclosed that some forty-four (44) persons have retired – thirty-four (34) in the Hospitality Sector and the Manufacturing Sector and ten (10) in other sectors.

“I am constrained to note that the regulatory framework to support No. 12 of 2013intimates that this implementation process shall initially take place within the manufacturing and hospitality sector at this point in time,” he added.

He pointed out that as this social protection programme evolves, other economic sectors shall be considered.

“It is also noteworthy to inform you that this social programme is cost neutral to the employee and that it shall be funded via the current 1% percent contribution made by employers into the severance payment fund,” said Minister Nisbett, who is also Minister of Foreign Affairs, Homeland Security, Justice and Legal Affairs.