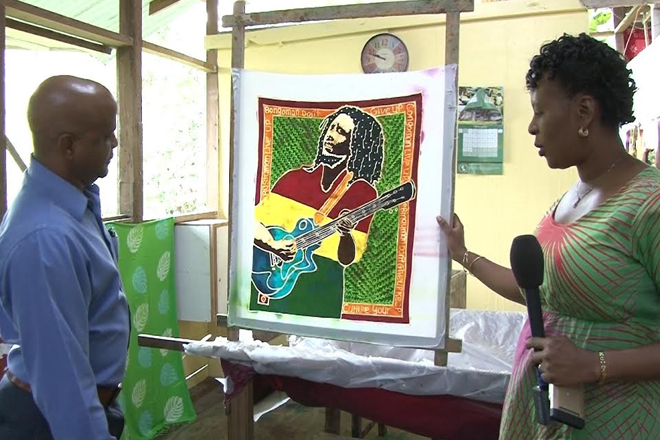 (ZIZ News) — Minister of Commerce, the Hon Lindsay Grant has continued his tour of the manufacturing sector with a visit to Caribelle Batik at Romney Manor.

Minister Grant led a group of officials on the visit to Romney Manor Caribelle Batik to get a tour of the facilities and hear about the work being done.

This falls under Minister Grant’s plans to tour various parts of the manufacturing sector and speak with the workers.

During the tour officials took grant through the step by step process of producing the unique Batik Wear.

Minister Grant commended the staff on the work they’re doing and pledged the government’s commitment to assist where possible.

“I think the work they are doing here is fantastic. The original artwork is difficult to replicate and so I wish Caribelle Batik all the best. Anything that we can do as a government we want to make sure that this remains because it can’t be reproduced anywhere in the Caribbean,” he said.

He also spoke of the historical significance of the estate.

“For me it’s an iconic destination for tourists. It’s rich in history. Over 400 years and I think a visit to St. Kitts without coming to Romney Manor Caribelle Batik, it’s a must to be here,” he said.

Once owned by Sam Jefferson II, an ancestor of Thomas Jefferson (3rd President of U.S.A.) the Great House was renamed Romney Manor following its acquisition in the early 17th century by the Earl of Romney.