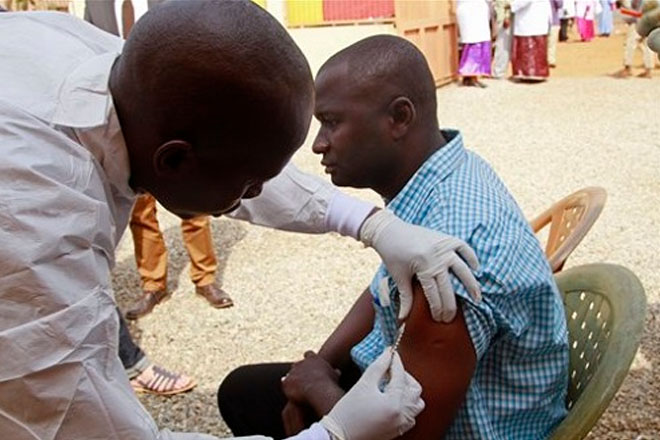 Conakry, Guinea (AP) — Guinea closed its border with Sierra Leone on Monday as part of new efforts to stamp out Ebola, an official said.

The current Ebola outbreak in West Africa has killed more than 10,300 people, mostly in Guinea, Liberia and Sierra Leone. Liberia currently has no Ebola patients, and Sierra Leone has seen a fairly steady decline in cases in recent weeks. But the disease remains stubbornly entrenched in Guinea more than a year after the outbreak started and authorities are now ramping up efforts to eliminate the disease.

Guinean President Alpha Conde announced this weekend that emergency measures would be “reinforced” for a 45-day period in five districts, including some along the border with Sierra Leone. The decision to close the border was made in the context of those new measures, according to Cmdr. Mamadou Alpha Barry, spokesman for the national gendarmerie.

Previously, Guinean authorities had monitored people crossing into the country for symptoms of the disease.

Sierra Leone, however, was keeping its side of the border open, according to government spokesman Theo Nicol. He confirmed that the Guinean side was closed, although he said Sierra Leone had not been formally informed.

The sudden border closure caught many people off guard. Djalima Balde, a Guinean who had been visiting Freetown, the Sierra Leonean capital, was stuck at a border crossing on Monday.

“We weren’t given any information,” she said. “I’m here with my three children, who are hungry. But they say we can’t pass.”

Guinea sent security forces to the border on Friday night in response to reports that Sierra Leoneans were streaming over to avoid a three-day, nationwide shutdown over the weekend to help end Ebola.