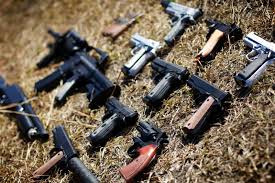 Bridgetown, Barbados (CMC) — Six murders involving the use of firearms this year have Attorney General, Adriel Brathwaite, vowing to crackdown on people trying to smuggle guns into the country.

On Monday, Brathwaite said as of the end of May, there were six murders committed with the use of guns, compared to two for the same period last year.

“If firearms are coming into the country illegally, it is not just a police matter. It is a Customs matter, it is a Coast Guard matter,” he said.

“I need to speak to the Commissioner [of police] to determine if this is a sign of things to come, because it could be that guys now feel that they need to resort to firearms, or it could be that there is an increase in the availability of firearms. Whatever the cause it is clear to me that all agencies need to get on board,” he added.

“We need to sit down at a national security level and make a determination in terms of what interventions are required.”

He also proposed a combination of police and community intervention to deal with gun violence in the communities.

The Attorney General’s count of gun-related murders did not include that of a 21-year-old man who died last Wednesday from gunshot wounds.

Brathwaite said although statistics reflect an overall decline in crime, gun-related murders is still cause for concern.