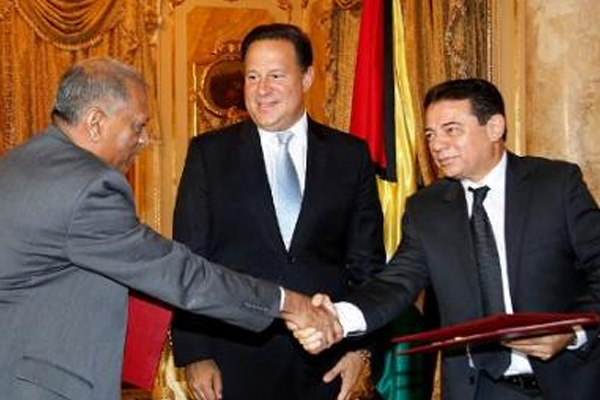 Guyana to supply 5,000 tonnes of rice per month to Panama

Georgetown, Guyana (GINA) — The governments of Guyana and Panama have signed an agreement that will see Panama purchasing approximately 5,000 tonnes of rice per month from Guyana, following a recent meeting between delegations from both countries.

“On August 6 in Colombia, President Donald Ramotar and the president of Panama, Juan Carlos Verela were having a meeting and President Ramotar suggested that Guyana’s rice be exported in a meaningful way to Panama. I need to say ‘meaningful way’ because we have always sent paddy and rice to Panama, but in small amounts because it was difficult to get into that market,” Ramsammy said.

He added that it was via this meeting the agreement between Guyana and Panama was formed.

“The president did not wait until he returned home, he called me from Colombia and suggested I lead the team to Panama and I proceeded before the president’s return to put arrangements in place, thus shortly after we concluded that the rice trade between Guyana and Panama should start immediately,” Ramsammy said.

Verela, according to Ramsammy, is eager to reduce the high cost of living in Panama, which is predominantly controlled by the private sector. He added that the GRDB officials also met with the foreign affairs ministry, minister and vice minister of agriculture and their team along with the GRDB counterpart group in Panama that is responsible for the purchasing of rice.

As a part of the agreement, the government of Panama will purchase approximately 5,000 tonnes of rice per month. The contracts signed include rice supply to Panama for the rest of 2014 and then there will be further discussions for a contract renewal in 2015. Nevertheless, it is expected that the contracts will continue throughout 2015, provided the terms of agreement were met to the satisfaction of the two countries, which will entail 50,000 to 60,000 tonnes of rice annually, exported to Panama and which will be purchased from local suppliers.

In addition, since Panama imports about 150,000 tonnes of rice per year and, though they produce rice, they are not able to meet their rice demands; the remainder of 100,000 tonnes required by Panama will be purchased through bidders, of whom Guyanese suppliers (the private sector) will have the opportunity to be a part, among American suppliers, Ramsammy explained.

The rice exportation agreement is one aspect of a larger agreement. Ramsammy told media operatives that the Panamanians have engaged themselves in an agriculture and trade partnership with Guyana for which a memorandum of agreement (MOU) was signed.

The MOU called for exchange of scientists among Guyana’s research institutions and ministries. The Panamanians are very interested in training at the Guyana School of Agriculture (GSA), exchanging crop seeds, looking at animal breed improvement, and the development of milk, and pork industry.

The minister added that the two countries will alternate visits every six months to hold meetings. Also a Panamanian delegation will attend the first ever national agriculture research conference in October.

The massive increase in rice production in Guyana, he stated, had seemed impossible up to some five years ago.

“When we were talking about a production of 500,000 tonnes of rice by 2020, people said it is impossible and we achieved that last year and now we anticipate 600,000 tonnes produced by the end of 2014, and I have no doubt we will surpass that amount this year,” Ramsammy said.

Nevertheless, when a choice was made to supply Venezuela with rice and omit the European and Caribbean markets because Guyana hadn’t the production, Guyana later did an excellent job at recapturing the market, Ramsammy explained, while adding that those countries are now solid customers.