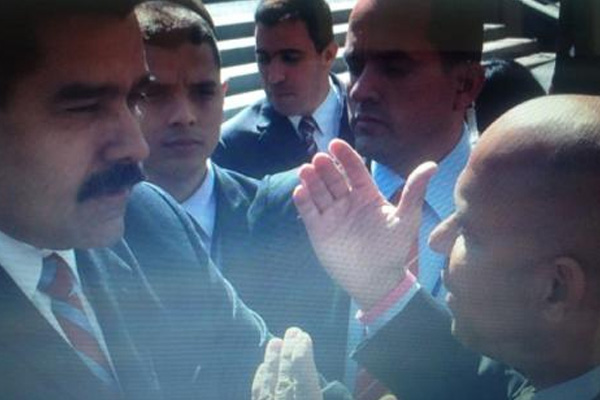 New-York, USA (HCNN) — Haitian Prime Minister Laurent Lamothe and Venezuelan President Nicolas Maduro met on Tuesday in New York where the two men spoke briefly about the cooperation and the strong and genuine friendship that Haiti and Venezuela and leaders on both sides have developed and further strengthened over the past years.

Lamothe — who arrived in Manhattan on Monday to participate in a series of meetings in the framework of UN general assembly and the Clinton Global Initiative summit — reiterated his deep appreciation for the solidarity Haiti has been receiving from Venezuela, through the PetroCaribe agreement and other friendly gestures.

“Venezuela, President Maduro, the Venezuelan government and the entire Venezuelan people are true friends of Haiti and we want to take every opportunity to express our gratitude for their concrete, genuine and strong solidarity and friendship,” Lamothe told The Haitian-Caribbean News Network (HCNN) on Tuesday.

“Venezuela’s help is one that is really making a difference in efforts aimed at reducing extreme poverty and laying the foundations for a brighter future for the Haitian people, particularly the most vulnerable,” said Lamothe.

The PetroCaribe agreement , which allows Haiti to pay upfront only part of the oil bill, has enabled the Caribbean country to save hundreds of millions of dollars over the years, which have been invested in the building of needed infrastructure and social programs aimed at assisting the poorest families and communities throughout the country.

Maduro also said how grateful the Venezuelan people and government are towards Haiti, the country which had provided crucial help to Venezuelan liberator Simon Bolivar and others to free Latin American peoples from oppression.

Venezuelan leaders, such as the late Hugo Chavez and now Maduro, often say that Venezuela has a debt toward Haiti for the help provided by Haitian forefathers to Latin American countries to access and enjoy the freedom they have today.

Haitian President Michel Martelly was expected to arrive in New York on Tuesday to address the UN general assembly and to have a number of sideline bilateral meetings.

The Martelly/Lamothe government is credited with the setting up of the largest and most structured social assistance programs in Haitian history, known as EDE PEP (Help the People).