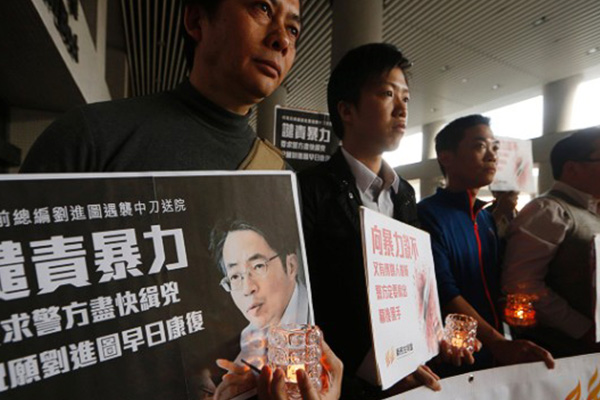 Hong Kong (CNN) — Hong Kong newspaper editor Kevin Lau, who became the center of controversy last month after being sacked from his post, is fighting for his life after being stabbed multiple times by an unknown attacker in Hong Kong, police say.

Lau, who was walking to his car at the time of the attack early Wednesday, was left bleeding with life-threatening injuries to a lung, his wife told journalists. Lau was taken to the city’s Eastern Hospital.

The assailant escaped after jumping onto a motorcycle that was being driven by another man, police say.

Last month, journalists were outraged when Lau was suddenly sacked from his post as the chief editor of Ming Pao, a newspaper known for its hard-hitting reporting on China. Over 90% of Lau’s staff filed a petition demanding an explanation for Lau’s removal, and some Ming Pao writers left their columns blank in protest.

Hong Kong’s chief executive C.Y. Leung issued a statement Wednesday, saying he was “indignant” and “outraged” at the attack on Lau.

“Hong Kong is a society ruled by law, and we will not tolerate this kind of violence,” he said.

“No journalist should be subject to violence,” she told CNN. “I have known Kevin for 30 years and I cannot think of any reason why anyone would try to kill him.”

The attack on Lau comes in the wake of Sunday’s demonstration by thousands of Hong Kongers protesting what they see as rapidly escalating efforts by China’s Communist Party to control Hong Kong’s media.

During the protest many of Lau’s former colleagues spoke, saying Lau’s dismissal reflected a worrying trend of media repression in the former British colony.

Wednesday’s incident is not the first example of a physical attack on Hong Kong’s media. Last June, knife-wielding arsonists threatened workers and burnt 20,000 copies of the Apple Daily, another Hong Kong newspaper critical of the government.

The Foreign Correspondents Club of Hong Kong released a statement Wednesday. “The growing number of attacks against members of the press in Hong Kong needs to be taken seriously by the local administration,” the document said.

“Hong Kong’s reputation as a free and international city will suffer if such crimes go unsolved and unpunished.”

French-based Reporters Without Borders ranked Hong Kong 61st worldwide in press freedom in 2014 — a far cry from its 18th place ranking in 2002, when its surveys were first conducted.