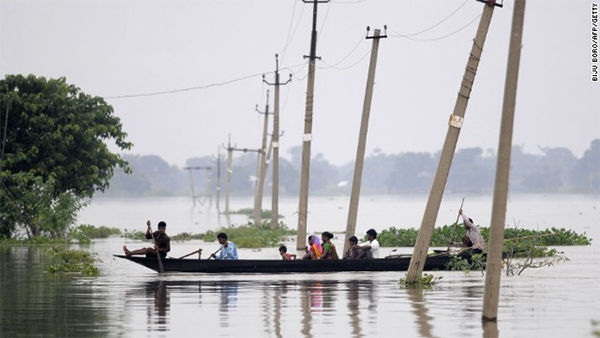 (CNN) — Dozens of people have been killed in flooding in northern and eastern India, while the death toll in Nepal has passed 100, government officials in the two countries told CNN.

At least 56 people have died in flooding and rain-related incidents in northern and eastern India over the weekend, with 28 deaths reported in Uttar Pradesh state, another 22 in the neighboring Himalayan region of Uttarakhand and six in Bihar state in eastern India.

The heavy rains have hit thousands of villages along the border with Nepal, Kishan Singh Atoria, a regional disaster-management commissioner, told CNN Monday.

India’s water resources ministry warned that the Rapti river in Uttar Pradesh had risen to “unprecedented” levels in the state’s Balrampur district.

Meanwhile, the death toll from floods and landslides in western Nepal since Thursday has reached 101 with another 126 people missing. More than 17,000 families have been displaced, according to government data.

The biggest challenge for the government of this impoverished Himalayan country now is to provide relief to the people displaced since their homes have been washed away by the rivers, said Jhankanath Dhakal of the National Emergency Operations Center on Monday.

Flooding was caused by incessant rain from Wednesday night to Friday night in some districts in western Nepal.

“Since the rainfall was unusually high the water could not flow in the rivers causing flash floods,” said Dhakal. “This was unexpected.”