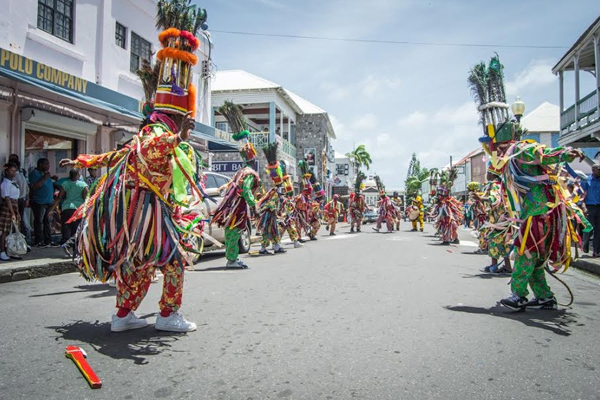 Sylvester’s Masquerade, the No Shirt Crew from St. Pauls and the popular music artiste Infamus entertained the crowd that gathered as the Independence Celebrations Committee unveiled its Independence Surprise event.

“I loved it,” said Kenisha, a 20 year old resident of Old Road. “I think it was a good idea because we don’t usually get this type of entertainment during our lunch hour.” The young woman complimented the organizers and said that she was looking forward to celebrating the Federation’s 31st Anniversary of Independence. “I’m very patriotic so this month and every month I will celebrate the growth of our Nation,” she concluded.

Kenisha wasn’t the only one who seemed to enjoy the performances which lasted about 15 minutes per act. The crowd cheered on the performers and most sang along with Infamus as he belted out his new tune “Love St. Kitts.”

Committee member Crios Freeman said he was pleased with the support from citizens who were busy going about their business.

“People stuck around. Some persons may get in trouble because they went back from lunch a little late but they obviously appreciated the performances today,” he stated.

Freeman encouraged residents to support as many of the activities as possible on the calendar of events. This Friday (September 05) is National Colours Day and individuals are encouraged to wear outfits displaying the colours green, yellow, black, white and red. Upcoming events include Independence Messages from the Governor General and Federal Cabinet on Monday, September 08, a Taiwanese Cultural Group Presentation at the ECCB Auditorium on Tuesday, September 09, and the Prime Minister’s Lecture Series at the Basseterre High School on Wednesday, September 10.

The full calendar of events is available online at sknis.info. Printed copies can be collected at Government Headquarters on Church Street.