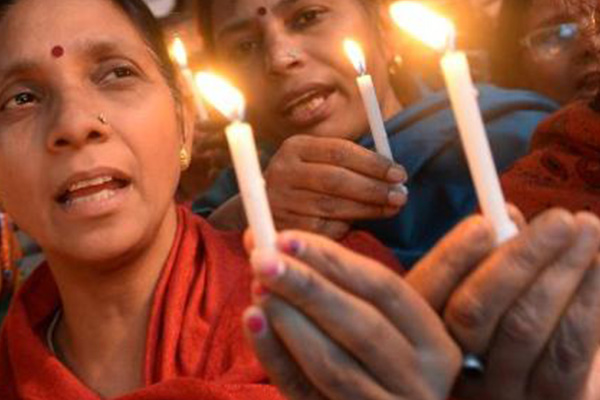 KOLKATA (AFP) — An Indian teenager was gang-raped in two separate attacks and then died after being set on fire, sparking protests in the eastern city of Kolkata and the capital, police said Thursday.

The 16-year-old was first assaulted on October 26 and then again the next day by a group of more than six men near her family’s home in the town of Madhyagram, 25 kilometres (15 miles) north of Kolkata.

The second rape occurred as she was returning home from the police station after reporting the first attack.

She was then set on fire on December 23 and died in a State-run hospital late on New Year’s Eve, police said.

“She gave us a dying declaration in front of the health officials that she was set on fire by two persons close to the accused when she was alone at home on December 23,” local policeman Nimbala Santosh Uttamrao told AFP.

“The accused tried to kill my daughter by setting her on fire to hush up their crimes,” the victim’s father, a migrant taxi driver from India’s poorest state Bihar, told AFP.

Neither he nor the victim can be named for legal reasons.

Several hundred activists on Wednesday protested in Kolkata over the crime, notable for its shocking brutality even after a year when sex crimes have been widely reported in India.

Activists also gathered in the capital New Delhi on Thursday, accusing the West Bengal government and police of failing to act swiftly after the girl lodged her initial complaint.

“We strongly believe that if your government had acted against the criminals… the subsequent horrific events would have been prevented and the young woman’s life could have been saved,” the All India Democratic Women’s Association, who organised the protest and other activists wrote in a letter to the state’s chief minister.

“The father of the girl … had brought his family to Kolkata a few months back precisely because they had thought that the daughter would get a better education in Kolkata,” the letter said.

A top state official said authorities would move quickly to ensure those responsible for the girl’s rape and death were brought to justice, the Press Trust of India reported.

“All the accused against whom there are allegations have been arrested. We are committed to zero tolerance for sexual violence,” West Bengal chief secretary Sanjay Mitra told reporters in Kolkata.

Rampant rape, assault and harassment of women in India has been highlighted in the past 12 months after the fatal gang-rape of a 23-year-old student on a moving bus in New Delhi in December 2012 sparked nationwide outrage.

Parliament has since passed tougher laws to punish rapists.