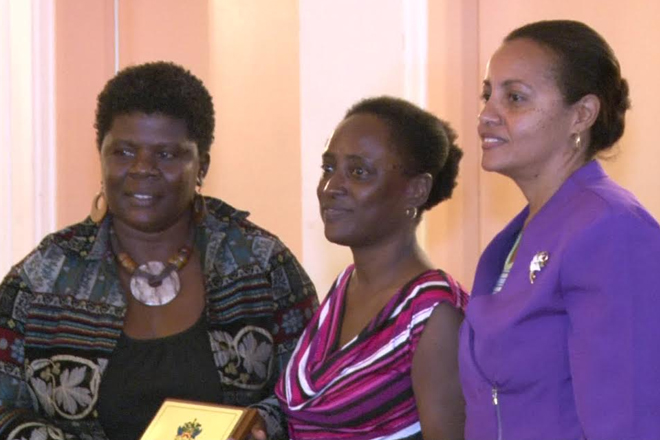 (ZIZ News) — In commemoration of the 105th International Women’s Day, women of the Federation came together on Tuesday to recognize women of St. Kitts and Nevis who have contributed significantly to society.

The Department of Gender Affairs organized an awards ceremony and breakfast at the Marriott Resort to formally honour women have contributed in various fields.

This formed part of a series of events to commemorate International Women’s Day.

In addressing the awards Ceremony Director Of Gender Affairs Celia Christopher said the sub-theme “Pledge For Parity” invites everyone to get involved.

“If parity therefore is to be realised by 2030, there has to be increased momentum and i implore you to personalise the struggle for gender equality. This is a universal struggle and demands universal participation,” she said.

Keynote speaker Marguerite Foreman outlined the meaning of the theme and spoke of the need for men and women to work together for gender equality.

“On this international women’s day we are being called upon—challenged in fact—to make a solemn promise that we will work towards a state of equality with men and women and women joining forces we can collectively help women advance equal to their numbers and realise their limitless potential they offer economies the world over,” she said.

Minister of State with Responsibility for Gender Affairs, Hon. Wendy Phipps, highlighted that in the federation a large percentage of women are in leading roles.

She said, “In spite of the global statistic, when it comes to the public sector of St. Kitts and Nevis, there have been some dramatic improvements in that regard. You would agree with me if I pointed to the table on my left which is populated mostly by permanent secretaries that within the government system there are maybe 80 percent of the permanent secretaries that are already female,” she said.

She added that in a number of the private sector institutions in St. Kitts and Nevis, “women are within the boardroom but not necessarily with the title of C.E.O. We have seen some of that however in the banking system for example in National Bank. We have seen others in terms of Central Bank staff appointments etc but there is still a long way to go and a high hill to climb.”

International Women’s Day 2016 is being observed under the theme “Planet 50-50 By 2030: Step It Up For Gender Equality” with the sub- theme “Pledge For Parity”.