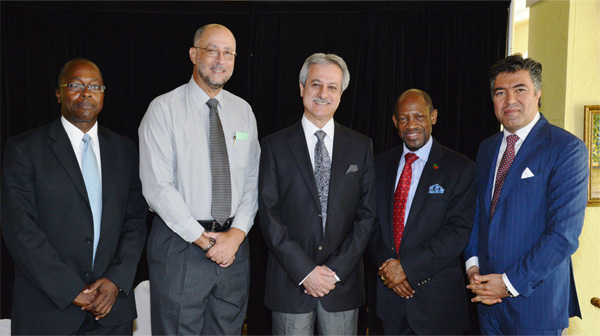 (SKNIS) “Today, St. Kitts and Nevis continues its forward movement, and we continue on many fronts,” said Prime Minister, The Right Honourable Dr Denzil Douglas on November 9 at a ceremony marking the announcement of the US $70,000,000 Prime Hotel and Condominium project slated to commence in 2014 on St. Kitts.

Prime Minister Douglas went on to say, “We continue, first and foremost, by ensuring that Kittitians and Nevisians of vision, competence and capability continue to play a pivotal role in the social and economic advancement of our Federation and by ensuring that the implementation of these individuals’ vision redound to the benefit of Nationals in the construction trades; air conditioning and refrigeration; accounting; excavation; hospitality services; and the range of other services, the combination of which is key to the transformation of unique ideas into viable, functioning, vibrant realities.” He then commended Faron Lawrence as an “accomplished and truly outstanding son of the soil” for being such a visionary.

The Prime Minister also took time to commend the staff of the St. Kitts Investment Promotion Agency (SKIPA), the staff of the Citizenship by Investment Unit and the other Governmental agencies that play a role in facilitating investors and investments for their work and commitment to ensuring the highest standards in due diligence procedures.

In closing, Prime Minister Douglas welcomed the partners of the Prime Hotel and Condominiums project.

“It is a pleasure and privilege to stand before you on the presentation of our proposed new development project, Prime Hotel and Condominium,” said Principal Investor Abbas Fahim as he announced the project which will be constructed on the hills overlooking the Basseterre National Park.

“Having gained citizenship of St. Kitts & Nevis over a year ago, I am overjoyed to be able to be a part of bringing such a major development project to this country that has accepted me and that I now regard as home, ” said Mr. Fahim explaining why he choose St. Kitts. “It was not enough to simply receive a piece of paper that made me a citizen, it was imperative that I contribute to the development of the country and its people.”

“A Government that understands economic development and is able to negotiate to the benefit of itself, its people and investors at the same time; a solid and reliable infrastructure and the availability of an educated, knowledgeable and experienced work force outlined Mr. Fahim. He “Political stability; general economic stability and by extension foreign exchange stability; a sound legal system and by extension the Rule of Law; being a true democracy; a friendly and hospitable people , and last but not least, a beautiful twin island country were also contributors.”

The Principal Investor went on to say that St. Kitts and Nevis should not take lightly that it possesses these qualities but rather, should continue to stand erect with pride.

Prime Hotel and Condominium “has a moral and social responsibility to it’s community and it is their intention to seek out the needs of the community in providing relief where and when possible,” he stated. “While profit is good and indeed necessary, it cannot be all about profit. Somewhere between the profit, it must also be about the people – the workers, the customer, the poor, the needy, the aged, the children…and it must also be about the environment.”

In terms of the environment, Mr. Fahim indicated that Prime Hotel and Condominiums will “go green” and embrace the governments “green” initiatives when and where possible and have incorporated “green” technology in all phases from construction to use.

“With Dr. Sirous Motevassel my business partner and consultant and Mr. Faron Lawrence our developer and local representative, I am confident that we have a team that will ensure the successful completion of this Project,” he noted.

Prime Hotel and Condominiums has projected that 150 direct jobs will be created during the construction phase and a projected 100 jobs during operations. The project will consist of a 70 room, eight floor major brand hotel, with all amenities and nine multi floor buildings, providing 324, one bedroom condominiums all built into the surrounding hillside with captivating views of Basseterre and the adjacent areas.

This is the company’s second project in the Federation.