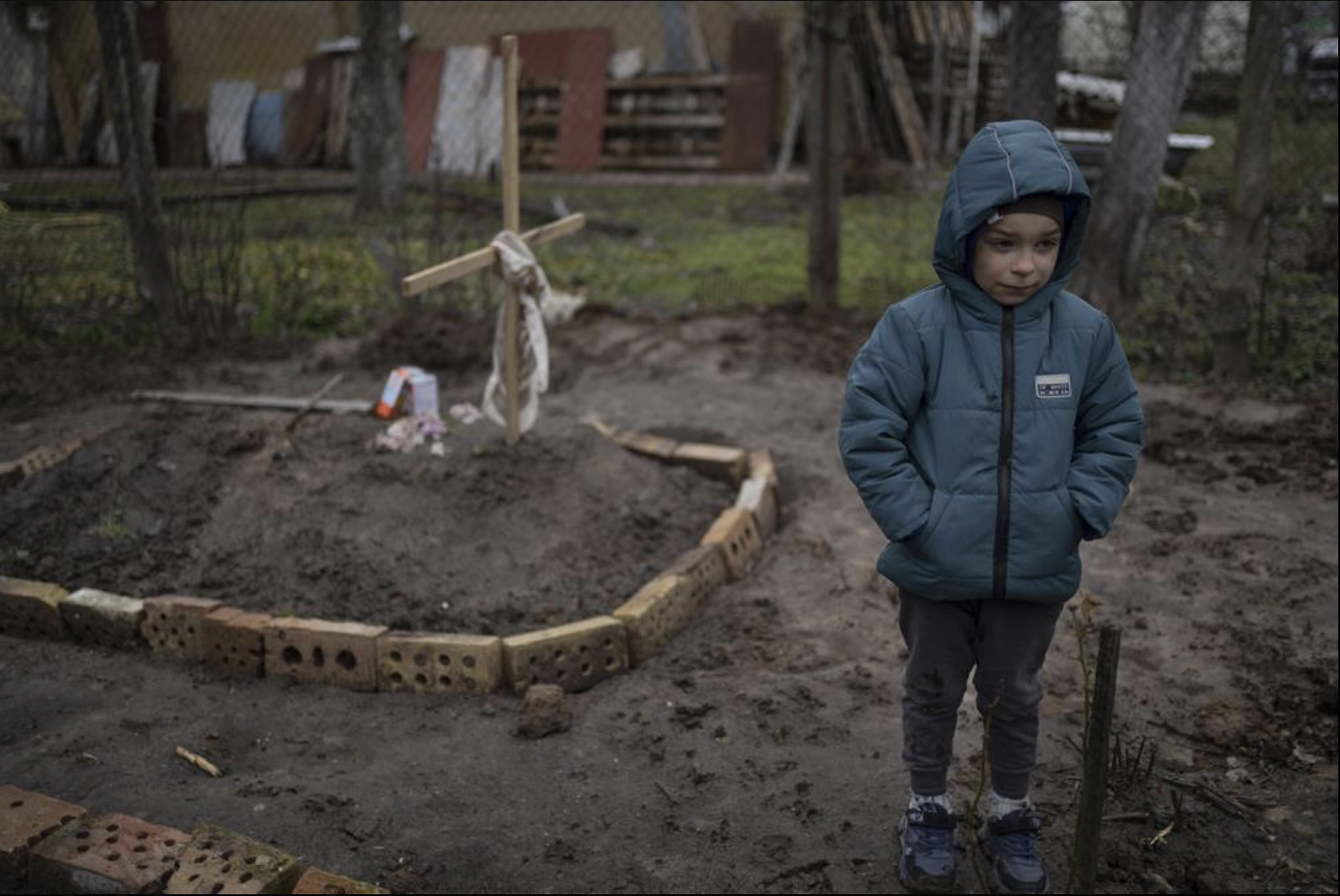 ‘It’s Not the End’: The Children Who Survived Bucha’s Horror

BUCHA, Ukraine (AP) — The coffin was made from pieces of a closet. In a darkened basement under a building shaking from the bombardment of the war, there were few other options.

Six-year-old Vlad watched as his mother was carried out of the shelter last month and to the yard of a nearby home. The burial was hurried and devastating.

Now Russian forces have withdrawn from Bucha after a month-long occupation, and Vlad’s father, Ivan Drahun, dropped to his knees at the foot of the grave.

He reached out and touched the dirt near his wife Maryna’s feet. “Hi, how are you?” he said during the visit last week. “I miss you so much. You left so soon. You didn’t even say goodbye.”

The boy also visits the grave, placing on it a juice box and two cans of baked beans. Amid the stress of war, his mother barely ate. The family still doesn’t know what illness caused her death. They, much like their town, barely know how to move on.

Bucha witnessed some of the ghastliest scenes of Russia’s invasion, and almost no children have been seen in its silent streets since then. The many bright playgrounds in the once-popular community with good schools on the far edge of the capital, Kyiv, are empty.

The Russians used a children’s camp in Bucha as an execution ground, and bloodstains and bullet holes mark a basement. On a ledge near the camp entrance, Russian soldiers placed a toy tank. It appeared to be connected to the fishing wire — a possible booby trap in the most vulnerable of places.

Steps away from Vlad’s home, some of the Russians used a kindergarten as a base, leaving it intact while other nearby buildings suffered. Casings of used artillery shells were left along a fence in the yard. In a nearby playground, the white and red tape marked off unexploded ordnance. The booms of de-mining operations were so strong they set off car alarms.

At the apartment block where Vlad, his older brother Vova and sister Sophia live, someone had spray-painted “CHILDREN” in child-high letters on an outside wall. Under it, a wooden box once used for ammunition held a teddy bear and other toys.

It is here that Bucha’s fragile renewal can be seen.

A small group of neighbourhood children gathered, finding distraction from the war. Bundled up in winter coats, they kicked a football, wandered around with bags of snacks handed out by visiting volunteers, and called out from a glass-less window above.

Their parents, taking in the feeble warmth of spring after weeks in freezing basements, reflected on how they tried to protect the children. “We covered his ears,” said Polina Shymanska of her 7-year-old great-grandson Nikita. “We hugged him, kissed him.” She tried to play chess and the boy let her win.

Upstairs, in a neighbour’s apartment where Vlad’s father now has merged his family with that of the neighbour to help manage their collection of children, Vlad curled up on a bed with another boy and played cards. The radiator gave off no heat. There was still no gas, no electricity, and no running water.

Not everyone in Vlad’s family can stand to return to their own apartment nearby. The memories of Maryna are everywhere, from the perfume bottles on the table by the front door to the quiet kitchen.

In the living room, the time has stopped. Limp balloons dangled from the overhead light. A string of colourful flags still hung on the wall, along with a family photo. It showed Ivan and Maryna holding Vlad on the day he was born. They celebrated his birthday on Feb. 19.

Five days later, the war began. And the family’s life shrank to a dank concrete half-room in the basement, lined with blankets and scattered with sweets and toys. It was very, very cold, Ivan remembers. He and Maryna did what they could to muffle the sounds of shelling for Vlad and keep him calm. But they were afraid, too.

Two weeks ago, Ivan took Vlad to the makeshift toilet in the shelter and visited neighbours. Then he came to Maryna to tell her that he was going outside. “I touched her shoulder, and she was cold,” he said. “I realized she was gone.”

At first, he said, Vlad appeared not to understand what had happened. The boy said his mother had moved away. But at the burial, the boy watched Ivan kneel and cry, and now he knows what death is.

Death is inseparable from Bucha. Local authorities told The Associated Press that at least 16 children were among the hundreds of people killed. Those who survived face a long recovery.

“They’ve realized that now it’s calm and quiet,” Ivan said. “But at the same time, older children understand that it’s not the end. The war is not finished. And it’s hard to explain for the smaller ones that war is still going on.”

The children are adapting, he said. They have seen a lot. Some even saw dogs killed.

Now the war has slipped into the games they play.

In a sandbox outside the kindergarten, Vlad and a friend “bombed” each other with fistfuls of sand.