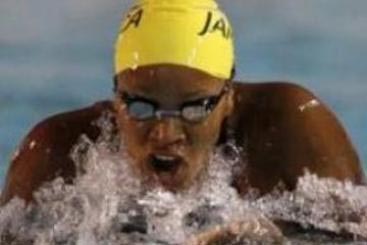 Atkinson, who entered the final with the fourth fastest time of 1:07.70 from the preliminaries, led her challengers from the start to stop the clock at 1:03.38 in the 100 metres Breaststroke and a full second ahead of Luliia Efimova of Russia (1:04.68) and Japanese Kanako Watanabe (1:06.03).

The Jamaican also added a bronze medal to her tally in the 200m Individual Medley (IM) in 2:07.30. Earlier, she finished 16th in the 50m Backstroke and failed to advance to the final.

Atkinson is also scheduled to compete in the 50m Breaststroke and the 100m IM on Monday.

Meanwhile, Trinidadian George Bovell, in his only event on Sunday, finished third in the 100m IM in a time of 51.87 seconds. Kenneth To of Australia (51.19) and Russian Vladimir Morozov (51.49) took the gold and silver respectively.

Bovell swims in the 50m Freestyle on Monday, the final day of the fifth stop on the World Cup circuit. The championship continues next month with events in Singapore, Japan and China.