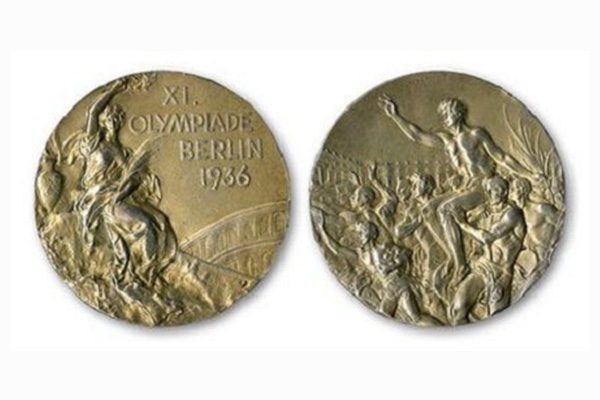 California (AP) — An Olympic gold medal won by Jesse Owens at the 1936 Berlin Games has sold for a record US$1.4 million in an online auction.

“We just hope that it’s purchased by an institution where the public could have access to it, a museum or something like that,” Owens’ daughter, Marlene Owens Rankin of Chicago, told The Associated Press before the sale.

The auction house said Burkle, who also owns William Faulkner’s Nobel Prize for literature, has plans for an educational tour of the historic pieces. He wasn’t available for comment Sunday.

Owens won gold in the 100- and 200-metres, 400 relay and long jump at the games attended by Adolf Hitler, who used the Olympics to showcase his ideas of Aryan supremacy.

According to the auction house based in Laguna Niguel, California, the medal is unidentifiable to a specific event. It said Owens gave the medal to his friend, dancer and movie star Bill ‘Bojangles’ Robinson, as thanks for helping Owens find work in entertainment after he returned from Berlin.

The medal was sold by the estate of Robinson’s late widow, Elaine Plaines-Robinson. SCP Auctions Vice President Dan Imler said the Owens family confirmed the medal is original; the whereabouts of the other three is unknown.

A portion of the proceeds from the sale of the medal will be donated to the Jesse Owens Foundation. The Robinson family had declined to comment on the auction, but Imler said they also plan to use the proceeds to pay college tuition.

Last month, IOC President Thomas Bach told the AP that the Owens medal is “a part of world heritage.”

“(It has) an importance far beyond the sporting achievements of Jesse Owens, which is part of world history,” Bach said. “To put this up for an auction is for me a very difficult decision (to accept).”

The record price for the Owens medal surpassed that of a silver cup awarded to the winner of the first modern-day Olympic marathon in 1896 that sold for $865,000 in April 2012. It also topped the highest price paid for a US Olympic item — the “Miracle on Ice” jersey worn by team captain Mike Eruzione in 1980 that sold for $657,250 last February.

The auction, including more than 1,000 sports memorabilia items, brought in a total of nearly US$4.5 million.

Other top lots included Jackie Robinson’s game-used bats from his historic 1949 National League Most Valuable Player season and the 1955 World Series, which sold for $183,500 and $128,617, respectively; and a Jackie Robinson single-signed baseball attracted a record bid of $104,765.