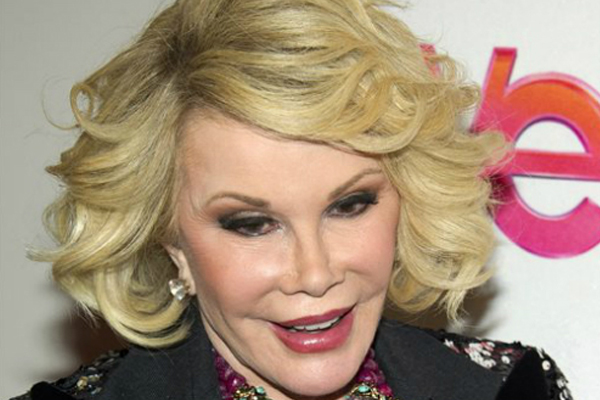 Brooklyn-born Rivers, 81, reportedly stopped breathing while undergoing a medical procedure on her vocal cords at a clinic in New York on August 28 and was rushed to Mount Sinai Hospital.

“My mother has been moved out of intensive care and into a private room where she is being kept comfortable. Thank you for your continued support,” said Melissa Rivers in a statement.

New York Daily News reported that Rivers was last week placed in a medically induced coma after going into cardiac and respiratory arrest during a routine doctor’s visit.

Rivers just days earlier filmed a special 90-minute episode of “Fashion Police” and has a string of appearances scheduled in the coming weeks, followed by a tour of Britain in October.

A long-time New York resident, Rivers has spared no one her razor-sharp wit and is considered one of the best at delivering a cutting one-liner with a well-timed zinger.

In recent decades, Rivers has been well-known for her love of multiple plastic surgeries, taken to excess with her exaggerated cheek bones and her preternaturally wrinkle-free face.

Born Joan Alexandra Molinsky, she graduated from New York’s Barnard College and worked in the fashion industry before starting out in stand-up under the stage name Joan Rivers.