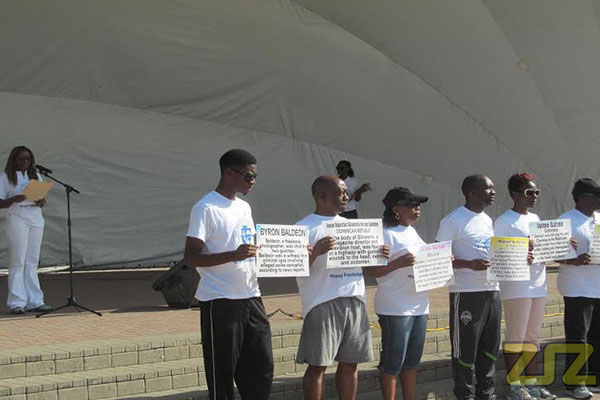 (ZIZ)– Media workers from around the region took to the streets of downtown Kingston, Jamaica on Saturday morning in a walk to show their support for freedom of the press.

The walk was held as part of events to mark World Press Freedom Day, organized by the Jamaica National Commission for UNESCO.

Joined by a marching band and cheerleaders from a local high school, the journalists carried placards illustrating the persecution media workers around the world have faced.

The walk ended with a brief rally at Emancipation Park.

Alison Bethel Mackenzie, Executive Director of the International Press Institute, said the march was significant as it shows solidarity for the cause.

“You have representation from all of the Caribbean islands here to send a message that press freedom is important, that it is the freedom on which all other freedoms stand, and I think that that is extraordinarily significant.  Also because Jamaica recently repealed criminal defamation and that is a monumental historic occasion,” she said.

Among the participants was veteran Jamaican Broadcaster and Lecturer at the Caribbean Institute of Media and Communication [CARIMAC], Fae Ellington.

She told ZIZ’s Jason Davis, “It’s very important to us in Jamaica. One, because we are far more fortunate than many other journalists in other countries of the world so we are leading by example you could say. But it’s also important for us to think of those journalists whose lives are in peril every day just trying to do the job.”

The participants committed themselves to the fight for free media by signing a declaration that expressed support for freedom of the press.