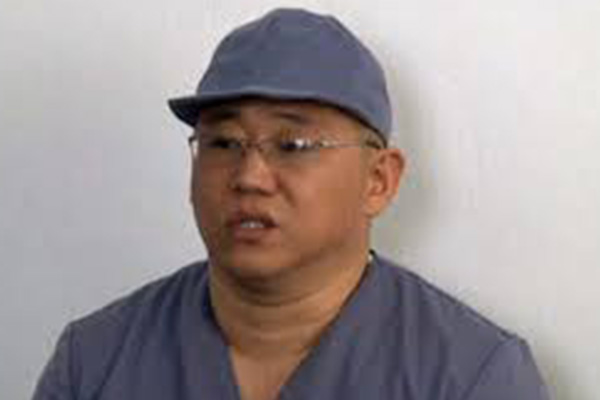 Kenneth Bae worried about his health in North Korean camp

(CNN) — Kenneth Bae, a Korean-American being held in North Korea, says he is worried about his health after authorities moved him back into a labor camp following a stay in a hospital.

“I know if I continue for the next several months here, I will probably be sent back to the hospital again,” Bae says in a video of a conversation with a Swedish diplomat recorded Friday.

Footage of the conversation in the labor camp was released by Choson Sinbo, a pro-North Korean newspaper based in Japan that has been given access to Bae in the past.

Wearing a gray jacket with the prisoner number “103” marked on it, Bae tells the Swedish diplomat, Cecilia Anderberg, that he thinks he’s already lost as much as 10 pounds in weight since he was transferred back to the camp a few weeks ago.

He expresses hope that North Korea will allow a U.S. envoy to visit for talks about his case.

But those hopes appeared to have been dashed over the weekend.

A State Department official said Sunday that North Korea had rescinded its invitation to the envoy, Ambassador Robert King, without giving a reason.

The brief KCNA report Monday didn’t state the purpose of the visit by Gregg, the chairman of the Pacific Century Institute, a U.S. nonprofit group that aims to promote education, dialogue and research in the Pacific region.

Bae, of Lynwood, Washington, was arrested in November 2012 in Rason, along North Korea’s northeastern coast. Pyongyang sentenced him last year to 15 years of hard labor, accusing him of planning to bring down the government through religious activities.

He is widely reported to have been carrying out Christian missionary work in North Korea.

‘I have not lost hope’

Bae, 45, operated a China-based company specializing in tours of North Korea, according to his family, who have described him as a devout Christian.

He was transferred to a hospital last year after his health deteriorated. But last week the United States said he had been moved back to a labor camp, a development his family described as “devastating.”

In the video, Bae asks the Swedish diplomat to tell his family that “I have not lost hope and have not given up anything.”

But says he is concerned that if his situation isn’t resolved soon, it could “drag on” for months longer.

He notes that annual U.S.-South Korean military drills due to start later this month may deepen tensions in the region, as they did last year.

State Department spokeswoman Jen Psaki on Sunday expressed disappointment that Ambassador Robert King’s visit was called off and noted North Korea had said it wouldn’t use Bae as a “political bargaining trip.” It is the second time North Korea has canceled a planned visit by King.

Psaki said that the joint military exercises are “in no way linked to Mr. Bae’s case.”

North Korea has been urging the South not to take part in the drills — a call that Seoul and Washington have rejected.

The Rev. Jesse Jackson, the U.S. civil rights leader, has offered, at the request of Bae’s family, to “travel to Pyongyang on a humanitarian mission focused on Bae’s release,” Psaki said.

Life in the camp

In the conversation Friday, Bae discusses details of his health problems, as well as the minutiae of life in the labor camp.

He says he is suffering from back pain and neck pain, making the eight hours of manual labor he does each day “very difficult.”

“I’ve been working with my hands a lot,” Bae tells the diplomat. “My hands all got numb and sore I have some cuts.”

But he says that he remains “strong mentally and spiritually, and I am trying to stay strong emotionally as well.”

Bae tells the diplomat that he has access to books and television at the camp and that the staff there treat him “very fairly.”

The TV antenna stopped working for a couple of weeks recently, he says, allowing him to spend “more time with the Lord, with the Bible.”

“That was actually a pretty good time for me,” Bae says.

Sweden represents U.S. interests in North Korea because the United States has no diplomatic presence in the secretive state.

“We again call on the DPRK to grant Bae special amnesty and immediate release as a humanitarian gesture so he may reunite with his family and seek medical care,” Psaki of the State Department said Sunday. “We will continue to work actively to secure Mr. Bae’s release.”