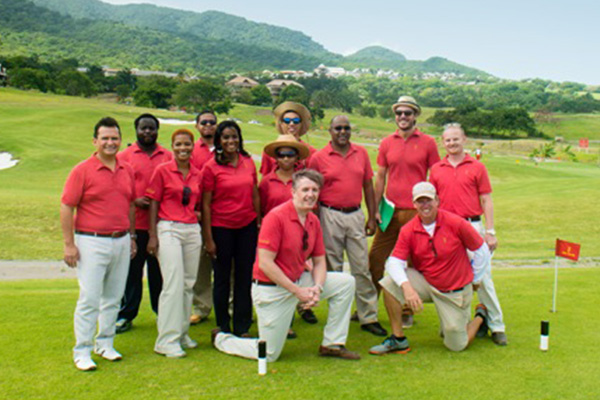 Basseterre, St. Kitts (CUOPM) — Golfers got the chance to sample the new Irie Fields Golf Course on Kittitian Hill for the first time this Whit Monday 9th June when international, regional and local golfers hit the first drives from the driving range as part of the first annual Long Drive, Chip and Putt competition.

This event marked the beginning of a new golf experience in St. Kitts and Nevis and indeed the Caribbean as the golfers experienced first-hand the lush organic golf course while enjoying the cool vibe and the incredible views of the neighbouring islands of Statia, St. Barts  and Saba.

According to a press release from the developers, Irie Fields Long Drive Chip and Putt competition was hosted in collaboration with the Royal St. Kitts Golf Club and the St. Kitts Open tournament, which ran from June 6th to 8th.

Minister of Tourism, Sen. the Hon. Richard “Ricky” Skerritt, who competed and sampled this new St. Kitts golf course, commented on the much anticipated official opening of Kittitian Hill and the full Irie Fields golf course in December and how this will contribute to making St. Kitts and Nevis as a prime golf destination in the Caribbean.

Of the almost 50 participants the finale came down to a long drive face-off between Charles “Rock” Blake who managed to beat O.J. Maynard to the grand prize of a two-night stay at Belle Mont Farm on Kittitian Hill, lunch or dinner for 4 and 4 rounds of golf.

Scheduled to open December 2014, Irie Fields Golf Course on Kittitian Hill was designed by Ian Woosnam, a former winner of the Masters in Augusta and winning Captain of the European Ryder Cup team in 2006.