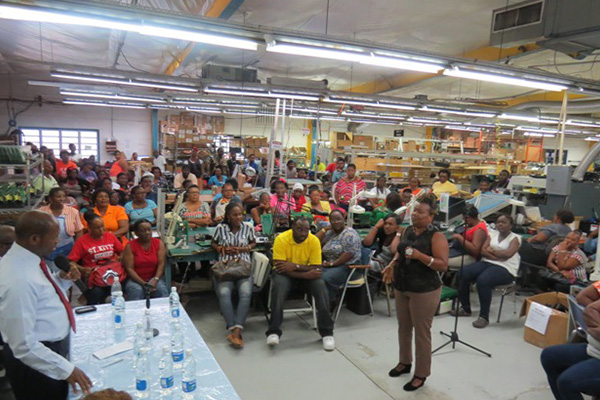 Basseterre, St. Kitts — A launching ceremony by the governing St. Kitts-Nevis Labour Party Administration that will improve the quality of life of workers in the Federation of St. Kitts and Nevis will be held on Wednesday.

The Ministry of Labour has organised an event to mark the launching of the New National Minimum Wage and the Long Service Gratuity Scheme on the Ebenezer Edmeade Street at the C.A. Paul Southwell Industrial Estate.

The Cayon High School Steel Pan Orchestra will render selections prior to the official start of the ceremony by Shakira Pitt, who sings the National Anthem followed by the Invocation by Claude Huggins.

This will be followed by the distribution of symbolic cheques and letters to which one of the recipients will respond.

Permanent Secretary in the Ministry of Foreign Affairs, Homeland Security and Labour, Mr. Elvis Newton will give the Vote of Thanks.

On July 29th July 2013, the Government of St. Kitts and Nevis in the National Assembly and without the support of the opposition, amended the Protection of Employment Act Cap. 18.27, legislating the Long Service Gratuity Act No. 12 of 2013, wherein persons who would have contributed ten (10) years or more of continuous service to the same workplace can opt to retire and receive a Gratuity.