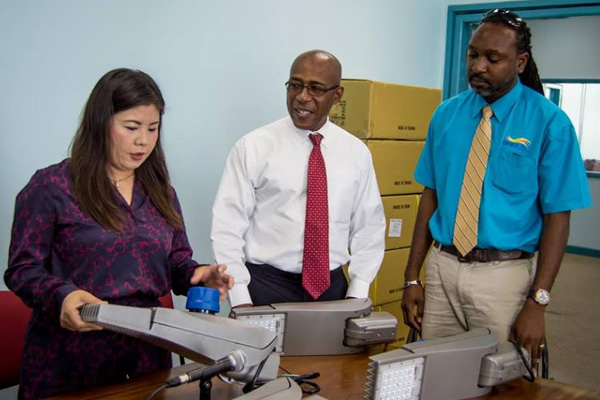 Basseterre, St. Kitts (SKNIS) — The first phase of an initiative to replace all of 5000 street lights in the federation with energy-saving LED bulbs began yesterday (January 07) in Basseterre.

Minister of Energy and Public Utilities, Hon. Earl Asim Martin, officially handed over the first 1000 bulbs to the St. Kitts Electricity Company Ltd (SKELEC) CEO, Mr Cartwright Farrell and said that this initiative dovetails a broader push to increase the federation’s use of renewable energy and reduce its reliance on harmful and expensive fossil fuels.

Mr Farrell said the bulbs are a welcomed addition to the country’s efforts in going green, as they burn less energy, are longer lasting, require little maintenance and are therefore more efficient than the current bulbs.

Minister Martin thanked the Sugar Industry Diversification Fund (SIDF), who played a key funding role in launching the street lighting programme and to technology company Speedtech Energy, who are responsible for the manufacture of the bulbs.

The current incandescent high-pressure sodium streetlights will be replaced with 80-watt LED bulbs, which will burn half the energy to produce the same output. The installations began on Church Street in Basseterre and will continue Eastward across the island.